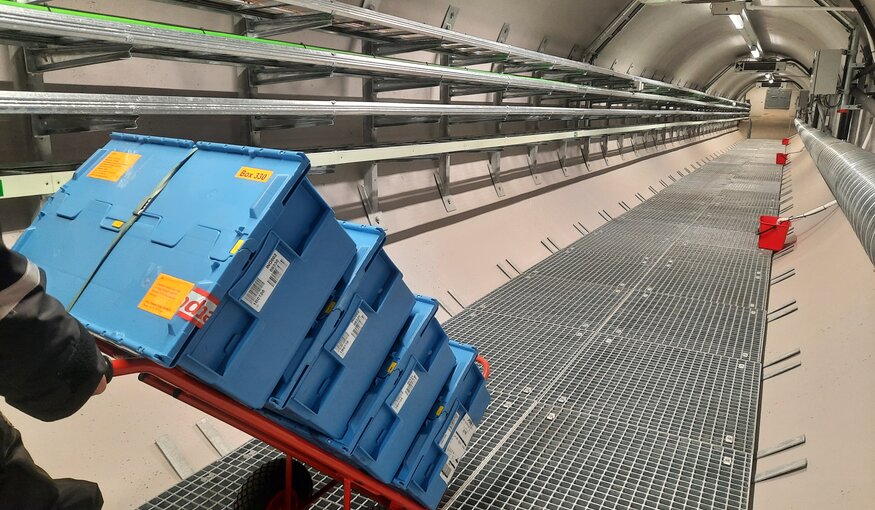 FAO’s International Year of Fruits and Vegetables is being recognized all around the globe—including at the Svalbard Global Seed Vault. Among the first deposits of 2021 were seeds of watermelon, strawberry and pumpkin. The February deposit included the seeds of many other crops from genebanks in Africa, Europe and South Asia.

Strawberries and watermelons may not come to mind when picturing the frozen, barren landscape surrounding the Svalbard Global Seed Vault, but this week, seeds from those fruits were deposited there for long-term safekeeping.

In total, five genebanks deposited almost 6,500 seed samples at the Svalbard Global Seed Vault: AfricaRice in Côte d’Ivoire, ICRISAT in India, the Julius Kühn-Institute (JKI) in Germany, SADC Plant Genetic Resources Centre in Zambia and the national genebank in Mali. The Seed Vault safeguards more than one million seed samples in total, deposited by almost 90 genebanks over the past 13 years.

“We want to use a range of methods to ensure we properly conserve the genes of these valuable fruits,” said Monika Höfer, the manager of the JKI’s Institute for Breeding Research on Fruit Crops. The institute completed its second deposit in the Seed Vault this week, safeguarding seeds of wild strawberry.

The goal is to continue to add from our genebank’s collection to the Seed Vault, said Höfer, adding, “So far, we only have a few samples stored there, whereas other genebanks store thousands.”

This deposit also marked a notable first: the Seed Vault Coordinator Åsmund Asdal (NordGen) will put JKI’s seeds into the same box as last year’s deposit to save space for future shipments. This is now possible thanks to an update to the Seed Portal, the database system managed by NordGen which contains information about the seeds in the Seed Vault and where they’re stored.

Among the four other genebanks that deposited seeds this week was the national genebank in Mali, which has a total of 3,446 seed samples—primarily of sorghum, an important crop in the region—in its collection.

“This time we’re sending 324 different accessions of rice to the Seed Vault, meaning that, in total, a fifth of our collection is now having backup copies in Svalbard,” said the head of the genebank, Amadou Sidibe.

It’s the third time the genebank, which is part of the Institut d’Economie Rurale (IER), is sending duplicate seeds for backup storage in Svalbard.

“The main challenge for the national genebank in Mali is to find sufficient resources to conduct the work needed,” said Sidibe. “We also have a limited number of trained staff and a strong need for training and hiring additional skilled staff members.”

The Svalbard Global Seed Vault was opened in 2008 as a backup for genebanks around the world to conserve duplicates of their crop diversity. In a worst-case scenario, if a genebank collection is destroyed or becomes inaccessible due to wars or extreme weather events, or if its collection is damaged due to a lack of sufficient funding or accident, the duplicate seeds will still be available for the depositor to retrieve from the Seed Vault and start anew.

“[It] is an excellent global facility crucial for saving our accessions and avoiding genetic erosion,” said Sidibe. “It contributes to the worldwide sustainable use of plant genetic resources for food and agriculture.”

However, the Seed Vault is not suitable for storing seeds of all crops. Crops without seeds, or with seeds that cannot withstand drying and storage at freezing temperatures, which is often the case with fruits from tropical regions, for example, require other methods of conservation.

Nevertheless, the Svalbard Global Seed Vault remains humanity’s largest crop diversity collection, and one that is designed to endure the effects of time.

Despite the ongoing pandemic, the Seed Vault is scheduled to open twice more this year, in May and in October.