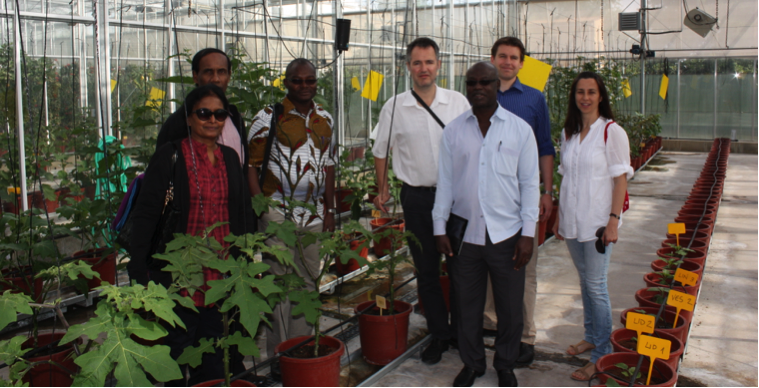 Valencia, Spain (15-16 May 2014) – Why eggplants? Eggplant (Solanum melongena L.) is an important vegetable crop, especially in tropical and subtropical areas of the world. According to FAO statistics, eggplant ranks 6th, after tomatoes, watermelons, onions, cabbages, and cucumbers, for total global production, with 46.7 million tons produced in 2011.

Eggplant is one of the 35 crops judged to be most important for food security and as such is included in the Annex 1 of the International Treaty on Plant Genetic Resources for Food and Agriculture. The Crop Trust supports work on eggplant pre-breeding as part of the CWR project, which is funded by the Government of Norway.

An Eggplant CWR kick-off meeting was hosted by the lead partner in the project, Jaime Prohen’s group at the Polytechnic University of Valencia. Partners from Sri Lanka as well as from Cote D’Ivoire attended. The project is an ambitious multi-tiered project aimed at using wild relatives for increasing the diversity available for eggplant (Solanum melongena) breeding, in particular with regards to traits related to adaptation to climate change.

The project will provide plant material with introgressions of the genomes of wild relatives. The pre-bred lines will have been selected for adaptation to climate change, in particular drought tolerance, in Southeast Asian and West African conditions.

To meet the project’s objective of providing material that is of global relevance, the project team therefore decided to obtain introgression materials in both Oriental and Occidental genetic backgrounds. Check this out the eggplant project website for more information

The meeting was very successful in meeting it’s goal of bringing together the project partners, introducing them to the larger framework of the CWR project, as well as discussing administrative issues and reporting requirements. A session that the participants felt was particularly useful dealt with the policy framework of the International Treaty and the rights and responsibilities for the different project partners under this framework.

The Crop Trust and Plant Treaty joint liaison officer, Daniele Manzella, led the discussions from afar via skype and was able to answer the questions of the project partners. We discussed with the project partners the need to share ideas and project outputs that could possibly be relevant to project’s communications efforts. I came away from the meeting feeling very optimistic about the chance of success of this ambitious project. It’s already a strong project team but the capacity building components of the project will further benefit all project partners.