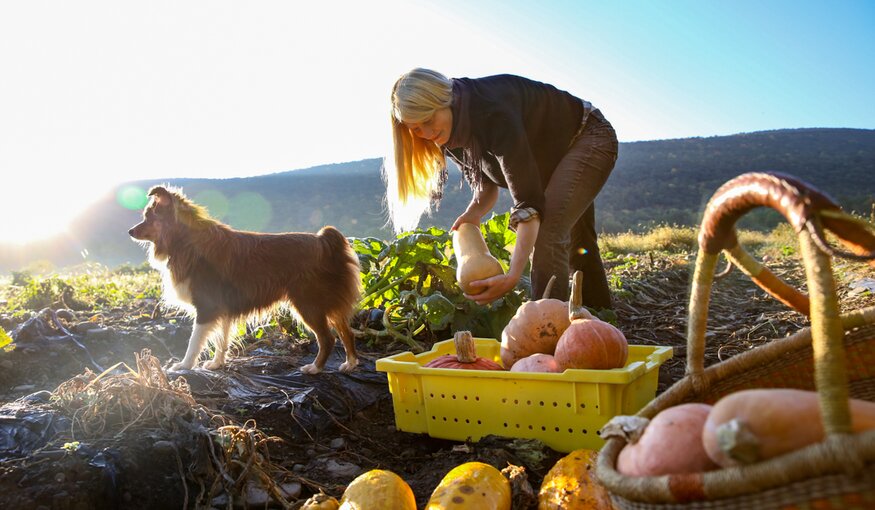 Words by Paul Cox for #CropsInColor

In a field at dawn, Petra Page-Mann is picking squash. Although collectively known as “winter squash” for their thick-skinned ability to last right through a long continental winter, here in the United States these prized vegetables of the harvest season are inseparable from autumn – and that most culinary of holidays, Thanksgiving.

Ancient Americans, both North and South, domesticated five viny species of the genus Cucurbita into edible winter and summer squashes that, through thousands of years of selection, have come to show some of the most visible diversity of any global crop. Pumpkins blend so closely into this diversity that they are often hard to classify apart from other squashes; many a so-called pumpkin pie is really made from a near relative that is neither round nor orange.

Here, in a chilly upstate New York squash patch early in the morning, is a good place to reflect – on appearances, on flavors, and on a harvest that is far older than Thanksgiving. The name squash itself comes from a word used by the northeastern Narragansett People: askutasquash. Petra’s butternut squash is a type of Cucurbita moschata, a species domesticated in Mexico more than 6,000 years ago and planted across North America by the time Europeans arrived.

All of this history leads up to the autumn’s harvest. Yet harvest is also a beginning. Petra, the co-founder of Fruition Seeds in Naples, New York, dedicates these fields to reproducing and selling organic seeds of less-common varieties so current and future generations can grow and cook with them. She is harvesting to keep these varieties alive, and with them the traditions of organic farming and gardening. 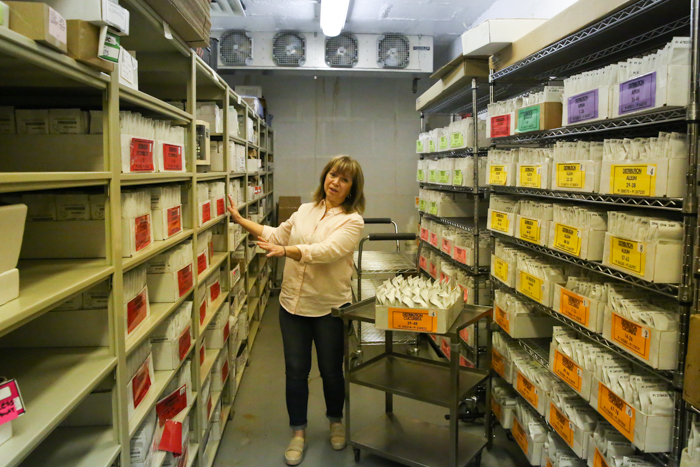 Just 30 miles away in Geneva, New York, the United States Department of Agriculture is participating in the same mission on a massive scale. Here in the Plant Genetic Resources Unit they have collected the seeds of some 200 vegetable species, from squashes to asparagus, radishes and tomatillos. This nationally important collection is a linchpin in the long-term conservation and study of squash diversity. Nancy Consolie, Biological Science Lab Technician, keeps the collection in order while sending and receiving shipments of seeds from around the country. This morning, a shipment has arrived from USDA Curator Dr. Claire Heinitz in Palier, California, who has recently been multiplying warm-weather varieties that do not grow well in the New York climate.

But where do the seeds go from here? Some of them go to plant breeder Michael Mazourek at nearby Cornell University, where he and his team develop new vegetable varieties for the Northeast through conventional breeding techniques. Modern vegetable breeders tend to apply these techniques to traits like high yield and long shelf life for the needs of the industrial food system. Mazourek, on the other hand, has been breeding for the greater resilience and lesser environmental impact of crops in organic systems. And for something else: flavor. 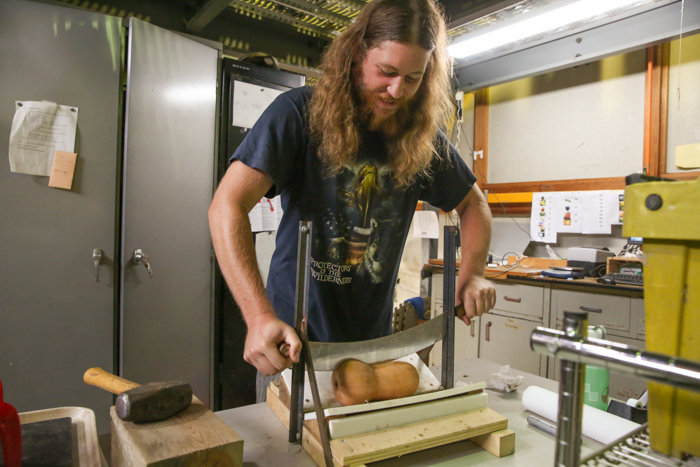 This all began with an attempt to breed a more delicious butternut squash. The effort was a triumph: dubbed the Honeynut, it is a small but flavor-packed butternut variant with ten times the sweetness. Fruition Seeds, among many other farms, now produces the Honeynut squash, and its fame has spread among chefs. At the same time, the effort has brought about a re-appraisal of the significance of old varieties conserved in the Geneva collection and elsewhere. These old varieties may be grown by few, if any, gardeners and farmers today, but they hold uncommon traits that can tempt palates and inspire growers.

In the lab, Shane Sullivan is slicing squashes down the middle to photograph their specific attributes – “to analyze the quality of their interior, for color, flavor and nutrition,” says Mazourik. Every variation is a piece of the breeding puzzle, unlocking idiosyncrasies and surprises. The old varieties may not suit the tight specifications of the modern supply chain – but a focus on flavor and diversity has brought them back to the cutting edge of squash experimentation. 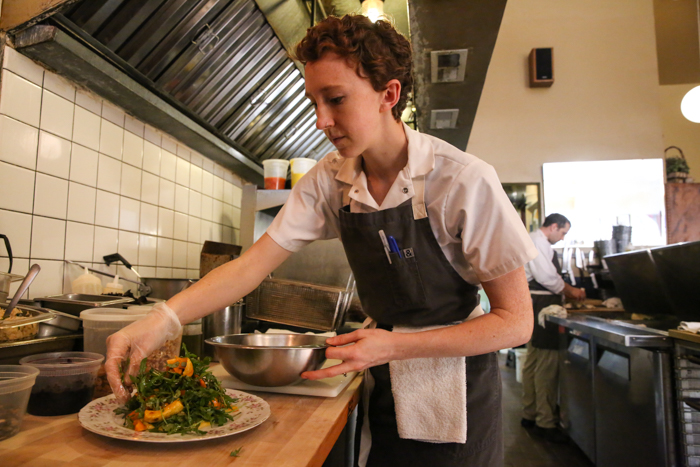 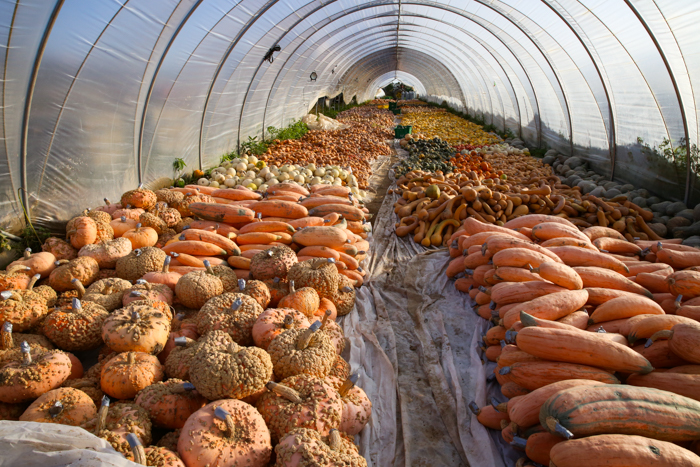 Mazourek and his team work directly with farmers to put the Honeynut, Koginut and other varieties in the field. At Norwich Meadows Farm in Norwich, New York, Zaid Kurdieh has harvested Honeynuts alongside a seemingly endless variety of other shapes and colors.

Zaid loves to grow something of everything and is quick to try out new and different seeds when he hears about them, either from breeders like Mazourek or from the chefs he supplies. He’ll also pick a variety out of a catalog, “just to try it out”, and come harvest season, share a few samples with his customers. Now the rewards of the season lay spread out inside high tunnels, ready for the market. 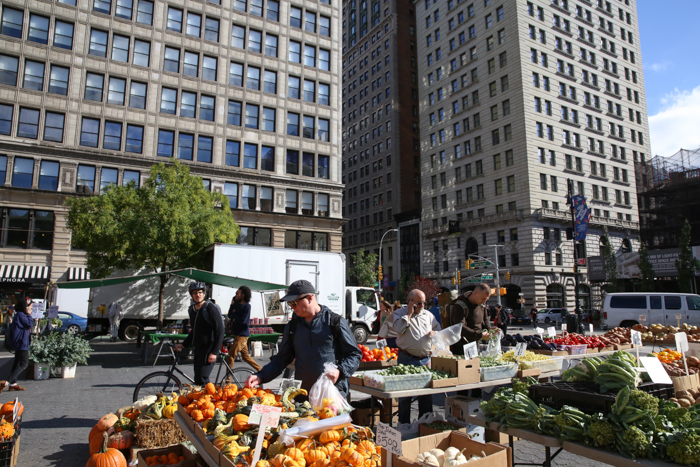 Seeking diversity well beyond that found on supermarket shelves, New York City chefs tend to buy these varieties straight from farmers – sometimes ordering a whole season’s worth of squash and other vegetables with payment up front, but more often seeking out the varieties they want at farmers’ markets. Like most of these, Union Square Green Market springs up on a weekly schedule between apartments and office blocks.

In the city, the season of harvest can be a distant concept, diffused into whiffs of pumpkin spice coffee and tiny decorative gourds. But the real, edible truth arrives with greater substance. Here, like strange living artifacts sent from New York’s periphery and its past, fabulous winter squashes have a special power to turn heads. 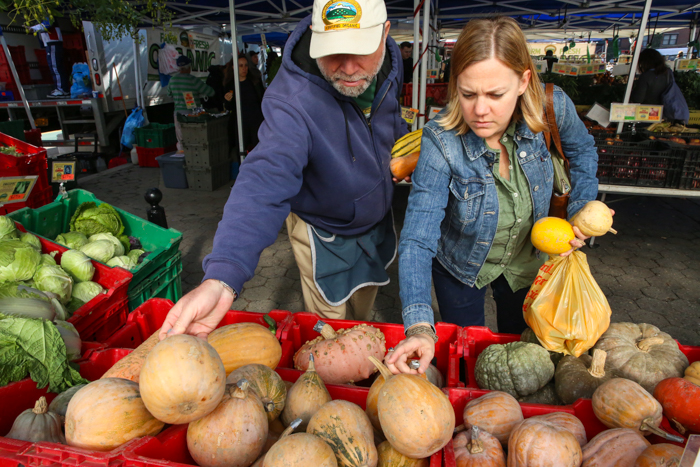 Zaid is here with his squashes, introducing the newest ones to Jenny Jones, purchasing manager from the restaurant Untitled at the Whitney Museum of American Art. For many urban shoppers, these forms can be as intimidating as they are intriguing – but the professionals see something different when they look at them. Jenny and Untitled’s executive chef Suzanne Cupps are well versed in the demands and possibilities of winter squash. Their job, as they see it, is to amaze their diners with the tastes, smells, colors, and textures of the season, thereby connecting them with farmers and the land. They achieve this through their interpretations of unfamiliar produce – whether the varieties are brand new or very old. 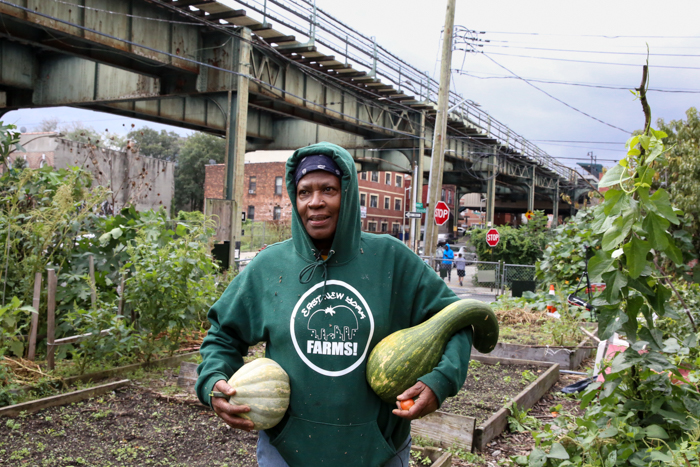 Meanwhile in Brooklyn, some squashes have been city-dwellers from the first sprout. In the neighborhood of East New York, Marlene Wilks grows a long list of vegetables in community garden lots and in her own backyard. Though she and her husband hold other, non-agricultural jobs, they spend long hours in their urban gardens. As her customers are neighbors hailing from all over the world, through the years she has grown an unusual diversity of international vegetables and herbs on her small urban plots. But close to her own Caribbean heart are Jamaican squashes, close yet distinct relatives of the butternut.

Marlene’s style of urban agriculture is one of many individual efforts that have grown into an organized movement all over New York City and far beyond. She is part of East New York Farms!, one of the pioneering programs for food justice, community building, and food access. Beginning in 1998 with a single vacant lot and folding table, the program is now a focal point for residents young and old to engage in gardening and food issues – and to get ahold of just the right vegetables for their family recipes, whether for daily meals or a holiday spread. 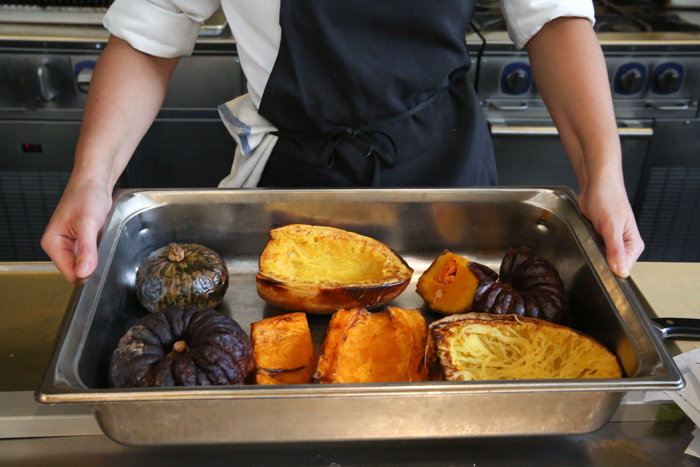 In the kitchen of Untitled at the Whitney, Suzanne Cupps reveals one of the secrets of winter squash: how easy it really is to cook. Taking a knife to a rock-hard butternut or pumpkin is a daunting start to any recipe, but it doesn’t have to be. For many uses, in fact, a squash can be baked or roasted whole until it’s buttery soft. This preparation hearkens back to the oldest American roots of this crop, and to stuffed, spiced pumpkins baked in the coals of a fire – the colonial precursor to the Thanksgiving pumpkin pie.

Today’s pumpkin pies are just as often baked from pre-processed pumpkins or brought home from the store. But experimentation with, and appreciation for, local squash diversity is back in a big way. If you want to join in and try something different, follow along with Untitled’s pastry chef Emily Rodriguez as she creates this Kabocha Pumpkin Pie. She has graciously shared her recipe here. 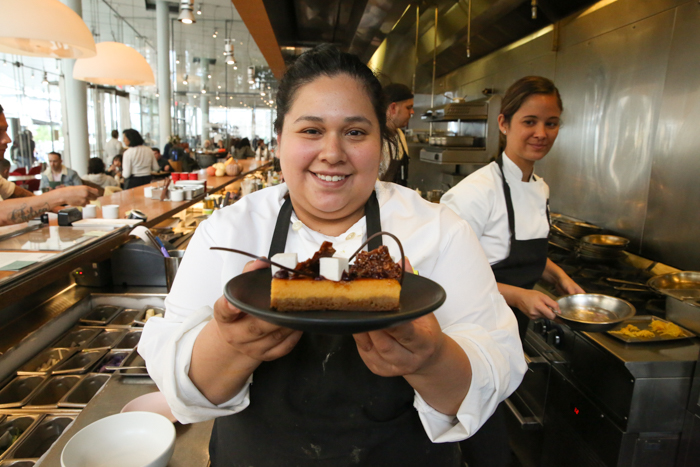 #CropsInColor celebrates the critical importance of crop diversity and its beauty and cultural relevance across different landscapes. It highlights many key actors in our food systems – from consumer to farmer to seed bank – who are doing their part in safeguarding, making available and using crop diversity.

#CropsInColor is made possible by the generous support of Corteva Agriscience.