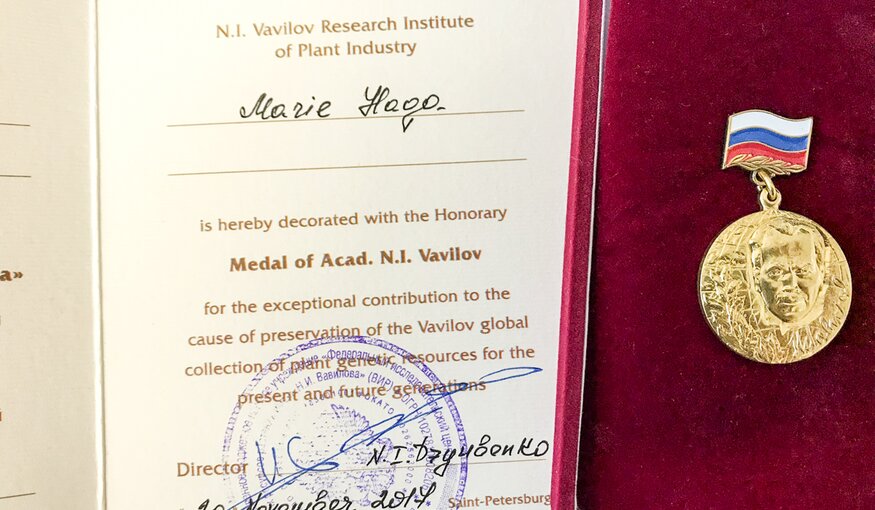 The Vavilov Institute recognized the Crop Trust’s contribution to its work last November when it presented Marie Haga with its N.I. Vavilov Medal. The medal was awarded for “exceptional contribution to the cause of preservation of the Vavilov global collection of plant genetic resources for the present and future generations.”

This week, the Crop Trust's Executive Board holds its semi-annual meeting at the N.I. Vavilov Institute of Plant Genetic Resources (VIR) in St. Petersburg, Russia. The meeting is just one of many collaborative activities between the Crop Trust and VIR in recent years.

The Crop Trust’s Executive Director Marie Haga joins her colleagues and members of the Executive Board to travel this week to Vavilov’s home in St. Petersburg, Russia. “We felt it was very fitting that we hold our semi-annual Executive Board meeting at the N.I. Vavilov Research Institute of Plant Industry or ‘VIR’ for short,” said Haga. “The Crop Trust and VIR have a long history of working together and we want to continue that collaboration.”

“All of us working in the plant genetics resources community owe an enormous amount of gratitude to Nikolai Ivanovich Vavilov,” said Haga. The tireless Russian botanist, geneticist, explorer, plant breeder, agronomist and geographer helped define the work that plant genetics resources specialists do now and was one of the greatest scientists of the 20th century.

“We can measure Vavilov’s legacy in many ways,” said Haga. “But perhaps the most tangible legacy lies within the walls of the genebank at the Vavilov Institute.”

Vavilov embarked on his first collecting mission in 1916 to northern Iran and the Pamirs while still an impressionable man in his late 20s. He came back to Russia in the midst of a world war and the onset of revolution in Russia with varieties of wheat and rye unknown to science. Vavilov had the foresight to know that if he were to fulfill his mandate of improving crops and preventing famines in Russia, he needed gather the building blocks of agriculture – crop diversity.

Vavilov is recognized as the foremost plant geographer of contemporary times. Between 1916 and 1933, he travelled the globe and collected germplasm. In 1933, Vavilov was forbidden to travel outside the Soviet Union so he sent his students and co-workers to collect. To explore the major agricultural centers in this country and abroad, Vavilov organized and took part in over 100 collecting missions. His major foreign expeditions included those to Iran (1916), the United States, Central and South America (1921, 1930, 1932), the Mediterranean and Ethiopia (1926-1927). By 1940, the collection of cultivated plants amassed by the Institute of Plant Industry stood at 200,000 samples – the largest in the world at the time.

The collection at VIR now stands at 325,000 samples. “The Crop Trust recognizes the global value of this collection,” Haga said. “Since 2005, we have been working with VIR to help safeguard the collections which Vavilov started and which his successors, like our friend, Nikolay Dzubenko, have so passionately continued.”

Vavilov’s original seeds and those collected after him need to constantly be regenerated to ensure their viability. “In the very early days of the Crop Trust, we embarked on a massive regeneration project and extended our assistance to VIR,” said Haga. Between 2005-09, the Crop Trust helped VIR regenerate thousands of accessions of food legume and forage crops. It continued its collaboration with another project between 2009-11 and supported the regeneration of more than four thousand accessions of barley, beans, chickpea, cowpea, faba bean, grass pea, lentil and maize.

Backing up the Vavilov Collection

“Collections like those at VIR's Pavlovsk station are vulnerable,” Haga said. “That’s why we’ve worked closely with VIR to help them safely duplicate their collections at the Svalbard Global Seed Vault.” The Crop Trust has assisted VIR with several deposits in the Seed Vault including one as recent as this month.

“Finally, we are really thrilled that Nikolay Dzubenko of VIR has become one of our Food Forever champions,” Haga said. The Food Forever Initiative helps raise public awareness about reaching the Sustainable Development Goal of Target 2.5 which addresses the urgent need to conserve agricultural biodiversity.

“The collaboration we’ve had with VIR over the past decade is just a start,” Haga said. “This year we have several new joint projects with VIR, which really look at extending Vavilov’s legacy for many more generations.”

The Vavilov Institute recognized the Crop Trust’s contribution to its work last November when it presented Haga with its N.I. Vavilov Medal. The medal was awarded for Haga’s “exceptional contribution to the cause of preservation of the Vavilov global collection of plant genetic resources for the present and future generations.” Since her appointment as the Trust’s Executive Director in March 2013 has no doubt eclipsed Vavilov’s travels many times over. For five years, she has tirelessly traveled the globe to promote the conservation of our crop diversity and to ensure we safeguard the irreplaceable collections like the Vavilov collection.

As she travels to continue Nikolai Vavilov’s legacy, Haga takes a moment to reflect on the recent honor bestowed upon her. “I am humbled to receive the Vavilov Medal and inspired to continue to lead the Crop Trust in the pursuit of fulfilling Vavilov’s vision of ending hunger and famine in the world by safeguarding our irreplaceable crop diversity,” Haga said. “A century ago, Nikolai Vavilov pointed the way which those of us in future generations need to take. As the Crop Trust’s Executive Board meets on his home turf, we will certainly be looking in the direction to which he was pointing.”