Ten years ago, a group of plant scientists, politicians, engineers, media and more gathered on a snow-covered mountain on the Svalbard Archipelago, Norway, for the opening of a unique facility: the Svalbard Global Seed Vault.

The establishment of the Seed Vault required a spirit of global cooperation that continues a decade later. The 10th anniversary celebrations at the end of February included several landmark moments: The total number of unique seed varieties stored in the Vault edged closer to 1 million; there were 23 depositing institutions – the largest ever to send seeds to the Vault at any one time, and we welcomed a new depositor too – the Estonian Crop Research Institute. These are all reminders that ten years on, the Seed Vault remains a crucial part of a trusted backup system for genebanks around the world. 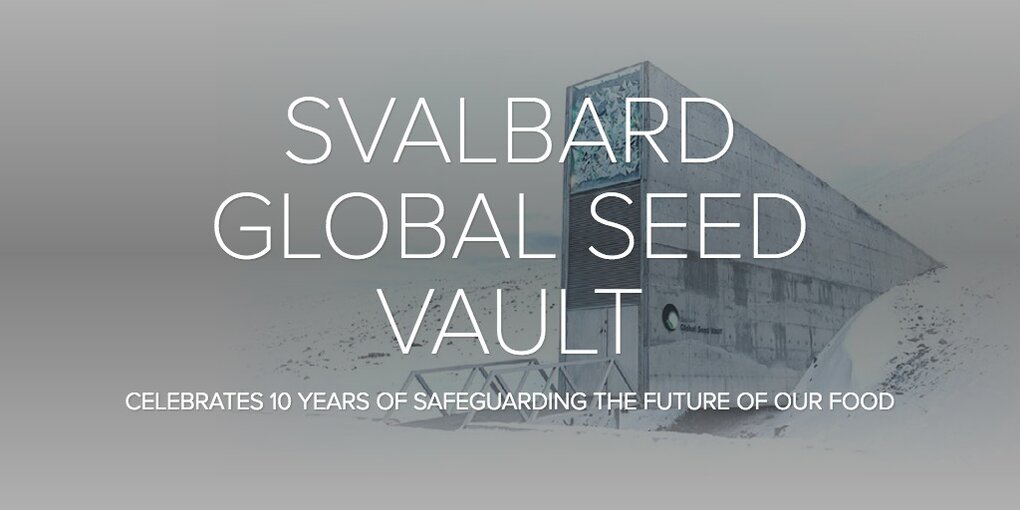 For each seed sample safely stored in the Vault, the global food system becomes a bit less vulnerable. The future of agriculture is less precarious now, thanks to the Vault and everyone who has been involved in making it a success.

But we should also remember that the Seed Vault is just the tip of the iceberg. It’s the crucial final piece in a much larger conservation effort that takes place around the world every day. And most of that effort takes place far from the Arctic, in the world’s genebanks.

With this in mind, we launched the inaugural Crop Trust Legacy Awards, a series dedicated to celebrating leaders in the field of crop conservation. This year, we awarded seven key “gatekeepers of crop diversity” who have dedicated their careers to this crucial work. The Legacy Awards dinner, hosted a stone’s throw from the Seed Vault on the eve of the 10th anniversary, was filled to capacity. We were honored to welcome Jon Georg Dale, Norwegian Minister for Agriculture and Food; Dagfinn Høybråten, Secretary General of the Nordic Council of Ministers; and Christine Dawson, Chair of the Governing Body of the International Treaty for Plant Genetic Resources for Food and Agriculture, among others. The specially commissioned awards were presented to six genebank managers from CGIAR – home to some of the most important crop collections in the world - and to Cary Fowler, Special Adviser to the Crop Trust, and one of the visionaries of the Seed Vault.

Recognizing these “guardians” is long overdue. They’ve spent years dealing with the daily challenges that genebanks face, as well as witnessing the breakthroughs that come from a lifetime of working with seeds. They have inspired generations of researchers, and shown us the importance of protecting our agricultural history as a way of safeguarding our future. The awards are thoroughly deserved!

During our marathon few days at Svalbard, we also welcomed a large number of media to the Seed Vault. The fact there was so much interest was no surprise. But one thing that surprised us all was the weather. On the day of the anniversary celebrations itself, Bonn – where the Crop Trust has its headquarters – was colder than Longyearbyen, the nearest town to the Seed Vault, and the most northerly town in the world. Instead of snowing, it rained.

This was due to the so-called “beast from the east” – a weather system that swept across Europe, taking the cold air that would normally circulate around Svalbard with it. It made huge parts of the continent shiver. But perhaps it’s also a sign of things to come for the Arctic, which many scientists consider to be on the frontline of climate change. I’ve been visiting Longyearbyen since 1985 and back then, if you looked out across the bay, it would be completely frozen during the coldest months. Nowadays the bay is open water, even in the depths of winter. Fortunately the Seed Vault will be able to repel the worst that climate change can throw at it. But can we say the same for the farmers in Africa, Asia or Latin America who sometimes don’t know if the rains will come as torrential downpours, or not arrive at all?

Probably not, or rather, not yet. That’s why seed conservation, combined with the regulatory framework for genebanks is so critical. They enable scientists to access and use seeds to develop hardier crops – ones that can beat the heat, tolerate drought or survive flooding. While much work remains to be done on this front, it’s comforting to know that the Seed Vault exists as a back up system for this work, and that 10 years later – it remains a success.

Of course we can’t talk about the 10th anniversary of the Seed Vault without taking a moment to recognize the many partners that have helped make the project a success - from the national governments and genebanks of the world; to our colleagues at the Nordic Genetic Resource Center (NordGen), who have kept the Vault’s operations running smoothly for a decade and to Norway’s Ministry of Agriculture and Food, which remains firmly committed to the success of the Vault. Norway’s recent announcement that it will invest USD$10 million in strengthening the Vault is testament to this. In addition, Statsbygg – which oversees the daily security of the Vault - has guarded and monitored it around the clock since day one.

We couldn’t wish for a more committed team of partners. With their hard work, the Svalbard Global Seed Vault will continue to be the safest – and “coolest” – seed insurance policy the world has ever known. Happy birthday to everyone involved.

Greetings from all of us in Bonn,