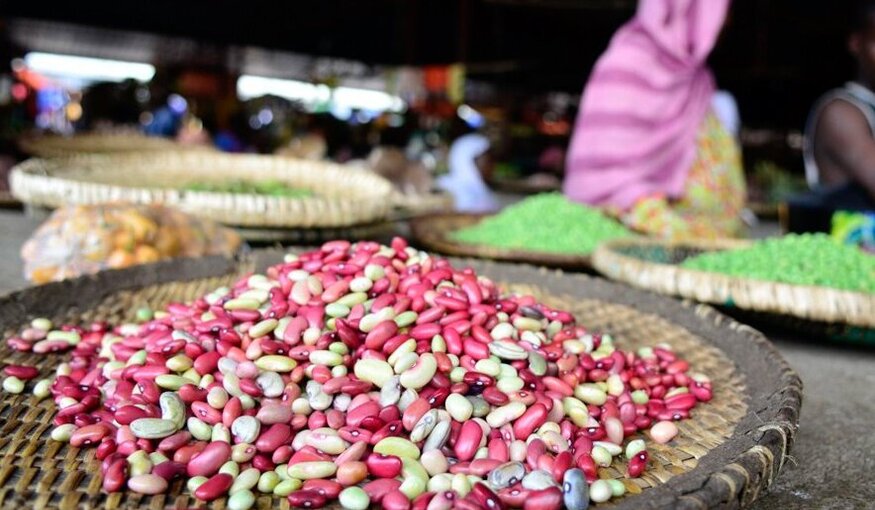 A Genebank Platform Impact Fellow looks at the journey of beans from the genebank to farmers’ fields.

Stefania Sellitti may not be able to trace her family history back beyond her great grandfather, but she can trace the ancestors of the bean variety MAC 44 back no fewer than 10 generations. Stefania, an economist who recently participated in the CGIAR Genebank Platform’s Impact Fellowship Program, has just completed a study of several different high-iron climbing beans, following them back to where some of their ancestors are to be found – the genebank of the International Center for Tropical Agriculture (CIAT).

As part of a six-month fellowship, Stefania sought to track the whole journey of a genebank bean sample, from its introduction into a genebank, through its distribution and use in breeding programs, to its production by farmers and ultimately its consumption in Rwanda.

“Crop breeders routinely begin their search for breeding material by looking in genebanks,” Stefania said. “However, the relationship between the original genebank samples and the improved varieties grown by farmers is not well documented. We often just don’t know the ‘family tree’ of some of the varieties in the farmers’ fields.”

Stefania chose to work in an area where the impact of the genebank is suspected to be particularly high. Crop breeders have for some time been mining genebanks for high levels of micronutrients like iron, zinc or the precursor of vitamin A, which can greatly enhance the nutritional value of some of our common food crops.

In a process known as biofortification, a term coined by CIAT scientist Steve Beebe in 2001, breeders seek to reduce the “hidden hunger” prevalent in some parts of the developing world caused by people not consuming enough micronutrients. Biofortification involves breeding staple foods which have good agronomic properties and are also packed with minerals and vitamins.

“Billions of dollars are spent annually in developing countries to provide supplements and fortified foods to address micronutrient deficiencies,” said Howarth Bouis, an economist who spearheaded the creation of the HarvestPlus program. “We asked, what if we could get plants to do some of this work for us?”

HarvestPlus has done just that, coordinating biofortification projects which have brought high zinc levels from lesser known varieties into improved rice, wheat, maize, potato, lentil and sorghum; the vitamin A precursor into maize, cassava, sweetpotato, bananas and plantains; and iron into not just improved bean varieties, but also pearl millet, cowpea, lentil and sorghum. “Our goal is reach one billion people with biofortified foods by 2030,” said Howarth.

Iron deficiency is the world’s leading nutritional deficiency and the most common cause of anemia, particularly in developing countries. It can impair cognitive and physical development in children, while anemia increases risks to women during childbirth.

“In many countries, like Rwanda, where common beans are a staple food, iron deficiency is high,” said Howarth. “So, it was only logical to attempt to biofortify beans with iron.” High-iron beans were developed at CIAT in collaboration with national partners through funding from HarvestPlus.

Scientists started with beans conserved in the CIAT genebank that are naturally high in iron and crossbred them to adapt them to local conditions. As well as producing good yields and a grain color preferred by farmers, the beans also tolerate intermittent drought. Studies now show that eating thse specially-bred, high-iron beans twice-a-day for just four-and-a-half months reduced iron deficiency and anemia in young women in Rwanda. Iron-biofortified beans have now been released in several countries across Africa, Latin America and the Caribbean.

Direct from the Genebank

It was a long journey however from the CIAT genebank to the plates of Rwandans. “Scientists suspected that a lot of wild relatives and landraces of domesticated beans do have these micronutrients,” Stefania said. “The problem is finding which of thousands of samples contain them.” The CIAT genebank was the natural start for a bean breeding program, but with 38,000 samples of beans from 144 countries, where do you start?

“Rather than having breeders evaluate all 38,000 samples, CIAT scientists developed a core collection, using all the available data and tested those samples,” said Peter Wenzl, CIAT’s Genetic Resources Program Leader and one of Stefania’s mentors during the fellowship. “The core collection is designed to ‘distill’ most of the genetic diversity in a genebank into a limited number of samples, typically around 10% or less of the total.”

During this evaluation for micronutrients, scientists found that some of CIAT’s genebank material looked quite promising. Those varieties became the first parents for the development of high-iron bean varieties. The initial screening determined which of the genebank samples would be incorporated into the breeding program.

Once the breeding process starts, the genebank accession number of the germplasm can get lost in the shuffle. Stefania had to turn to a number of sources to sort out the lineages, including interviews with breeders and the staff of CIAT’s Bean Program, hard copies of catalogs, field books and online databases.

“We’ve been working closely with CIAT to document and consolidate the data about the genetic resources used in the high-iron bean project,” said Meike Andersson, the HarvestPlus Crop Development Specialist based at CIAT. “With the biofortification projects we can actually document that the genetic diversity safeguarded in genebanks has directly contributed to the development of improved varieties with new traits that otherwise would not have been found in any of the crops currently grown in farmers’ fields around the world.”

Stefania discovered one high-iron bean variety, MAC 44, had 10 genebank bean samples as ancestors in a nine-generation breeding program. “MAC 44 is a climbing bean variety released in Rwanda,” Stefania said. “Climbing beans can produce two to three times more beans on the same area as bush beans. It’s truly multi-national since the beans used in its development were originally sourced from all over the Americas and then conserved in genebanks.”

One of the accessions, G76, (doi:10.18730/PQ3QG), was part of the core collection first screened in the early 1990s. G76 is an improved cultivar bred in New York and originally conserved in the Beltsville Agricultural Research Center of the United States Department of Agriculture. CIAT then added the bean to its genebank collection in 1970. In one of the early stages of the development of MAC 44, G76 was crossed with G4553 (doi: 10.18730/PPJJP), another improved cultivar, which was added to the CIAT genebank in 1983 via Rwanda.

Stefania’s work has confirmed what plant genetic scientists have known all along: genebanks are often the source of the great grandparents of improved varieties of our common crops. Genealogists make careers of understanding how the journeys of our ancestors are woven together to produce us. Likewise, by establishing the pedigrees of improved varieties we can better understand the vital role of crop diversity and the genebanks that help in humanity’s fight against hunger – hidden and otherwise.