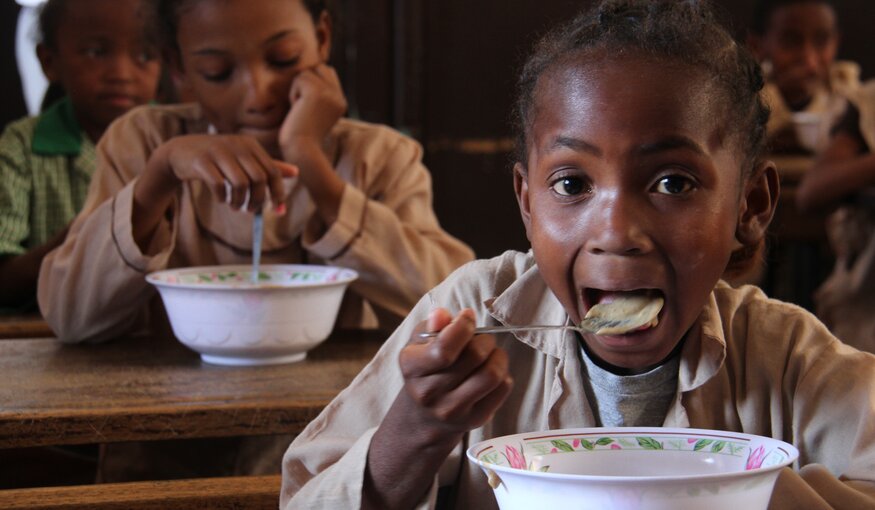 Under the school feeding program, children receive a nutritious collation three mornings a week, made of porridge produced locally and composed at 40% of beans flour. Credit: ©2014CIAT/StephanieMalyon

Many of us take eating three nutritious meals each day for granted. The reality is that, for many others, such bounty is unattainable. A new report has highlighted the barriers that hold millions of people back from nutritional security. But it also lays out how the world can work together towards rebooting the global food system, and how agrobiodiversity can play a role in making it truly work for all.

The 2020 Global Nutrition Report, an annual independent assessment of the state of global nutrition, paints a sorry picture. The food system shapes diets and livelihoods, from production to consumption – and it is clear it is deeply unbalanced. According to the report, today’s food system leaves 1 in 9 of the world’s population behind, making malnutrition and its consequences the leading cause of death worldwide.

‘The Global Nutrition Report is a roadmap towards a better future, and a call to give nutritional inequality the attention and solutions it demands.’

It identifies and prioritizes the gravest challenges facing world food security, calling “for a pro-equity agenda that mainstreams nutrition into food systems and health systems, supported by strong financing and accountability.”

Among the key challenges identified by the report is a lack of dietary diversity. Modern diets have developed an over-reliance on just a few staple grains, specifically rice, wheat and maize. Today, over 60% of the world’s daily caloric intake is made up of products from these three staples. Agricultural policy, according to the report, has prioritized improving varieties of these crops to increase their productivity, neglecting other, more nutrient-dense crops, which are sometimes referred to as “orphan crops” as a result.

For those most affected by malnutrition, this over-reliance is not a choice. Access to a diverse diet depends on a number of factors, including geography and economics. If a nutritious crop cannot grow in a particular place, it’s more difficult to include in the local diet. And if local consumers cannot afford it, they are forced to orient their diets around cheap, accessible staple crops that are always available. Here again, the most vulnerable are the most affected.

To reboot our food systems, making full use of the world’s agrobiodiversity is critical, especially in the context of a growing population and the challenges of a changing climate. The Crop Trust is helping to safeguard and make available crop diversity to improve food security and nutrition worldwide.

‘Our food system should rely on resilient crops that can meet the challenges of the future.’

In 2011, the Crop Trust launched the Crop Wild Relatives Project, a 10-year global initiative to collect, preserve and use the wild relatives of our cultivated crops. These rugged, scraggly cousins of crops like sorghum, cowpea, and millets might well hold secrets to developing nutritious, climate-resilient varieties. More recently, the Crop Trust launched the Seeds for Resilience project, which supports five national genebanks in sub-Saharan Africa in their efforts to conserve and use the diversity of key crops. These initiatives not only help make sure that the world’s agrobiodiversity is safe, but also make seeds available to scientists developing better varieties that help meet the challenges of food insecurity, widespread malnutrition, and a rapidly changing climate.

As we celebrated the International Day for Biodiversity, it is well to remember the Global Nutrition Report’s call for more diversity in our diets, and in our food system.