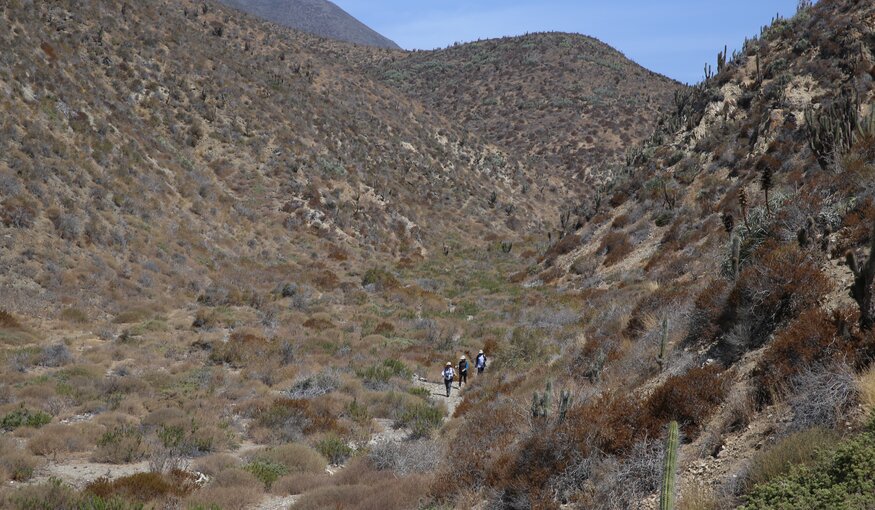 Bonn, Germany and Washington, DC (3 DECEMBER 2019)—As the world grapples with the challenge of sustainably feeding an increasing population in the face of harsh and unpredictable growing conditions, a report released today presents the results of a major global effort to prepare agricultural crops for climate change.

Over one hundred scientists from 25 countries on four continents took part in a six-year quest to collect the wild plant species that scientists and breeders can use to make our crops more productive in increasingly challenging climates. After spending a collective 2,973 days in the field on exhausting and sometimes even dangerous expeditions, the researchers secured 4,644 seed samples of 371 crop wild relatives—many endangered—of 28 globally important crops.

Crop wild relatives—the sturdier cousins of crops that still grow in the wild—have evolved to survive harsh conditions, such as low rainfall, flooding, temperature extremes and poor soils, and offer a largely untapped source of diversity for climate-proofing crops. Threatened by extinction due to rampant deforestation, climate change, urban sprawl and conflict, losing this diversity would have major implications for global food security.

“As part of this project, scientists went to far-flung corners of the world to collect and conserve a long list of plants that will help breed crops that are more productive and more resilient to the impacts of extreme weather and newly emerging diseases,” said Hannes Dempewolf, senior scientist and the head of global initiatives at the Crop Trust.

“These wild plants are related to a wide range of important crops. They hold the genetic diversity which breeders will need to improve those crops so we can feed nine billion people with nutritious food.”

The 10-year Adapting Agriculture to Climate Change (Crop Wild Relatives) Project, managed by the Crop Trust in partnership with the Royal Botanic Gardens and Kew’s Millennium Seed Bank (MSB) and with funding from the Government of Norway, represents the most ambitious coordinated global effort yet to collect and conserve crop wild relatives.

“Worldwide, there are dozens of genebanks safeguarding the diversity of food crops,” said Nora Castañeda-Álvarez, the lead researcher on the initial study which identified exactly which species should be collected.

“We found chinks in the armor of the global food system: Many important species were entirely absent from these collections or were seriously underrepresented in them. We needed an urgent rescue mission to find and safeguard as many crop wild relatives as possible before they disappeared from their natural habitats.”

Once identified, researchers across Asia, Africa, Europe and Latin America set out to secure the priority plants for their national genebanks.

Traveling by foot, four-wheel drive, canoe, horse and even elephant to reach remote locations, collectors on these rescue missions were provided with specialist seed collecting guides and basic seed collecting equipment, including seed collecting bags, sieves for cleaning the seeds, silica gel to dry the seeds, a GPS to geotag the collecting location and a first aid kit to treat minor injuries.

“The expeditions were not a walk in the park,” said Dempewolf. “They were perilous at times, and physically demanding, with heat, dust, sweat and danger from wild animals—from blood-sucking leeches to tigers. The stories these seed collectors brought back from the field often resemble scenes from an Indiana Jones movie.”

Underlying the urgency of the project, there were several cases in which crop wild relatives were already lost.

The 4,644 samples rescued during the mission include a carrot wild relative that grows in salty water; an oat wild relative resistant to powdery mildew, a disease that devastates its domesticated counterpart; and the particularly difficult-to-find wild variety of the Bambara groundnut—a high-protein legume that tolerates high temperatures and drought, and grows well on poor soils. They also include the following.

Why We Need Crop Wild Relatives

Lacking the hardy genetic make-up necessary to stand up to worsening conditions, domesticated crops are beginning to falter, with a recent report warning agricultural production will drop by a third if farmers do not immediately start planting crops that are resilient to climate change. In contrast, wild cousins are tougher, thanks to a range of traits they have developed over time, such as heat and drought tolerance and defense systems against pests and diseases.

Crossing wild relatives with their domesticated cousins using traditional techniques enables breeders to develop new, improved crop varieties that taste and look like our domesticated crops but with greater ability to stand up to climate’s extremes and unpredictability.

For example, with a narrow genetic base, the bananas we eat today are highly susceptible to disease outbreaks. Starting in the 1940s, Panama disease, a fungus, has destroyed countless banana plantations. In August 2019, Colombian authorities declared a state of emergency when a new strain of the disease crossed their borders. Banana’s wild cousins could help breeders develop varieties resistant to this and other diseases, as well as drought. In the past, collectors could easily find wild bananas. Now, they have to penetrate deeper into the disappearing rainforests of southeast Asia and collect them before monkeys eat them.

“This project has only succeeded thanks to the dedication and hard work of individuals in organizations around the world working toward a common goal, to safeguard crop wild relatives, that previously were overlooked and disregarded, but probably hold the key to the world’s food security in the years ahead. The findings are truly exciting and have highlighted to me what is possible if we focus on diversity and resilience at this time in our planet’s evolution,” said Chris Cockel, Crop Wild Relatives project coordinator at Kew’s MSB.

The samples are now safely stored in national and international genebanks, where they have boosted the world’s shared collection of plant genetic resources. They are also now available to breeders and farmers everywhere as governed by the Food and Agriculture Organization’s International Treaty on Plant Genetic Resources for Food and Agriculture.

Before breeders and researchers can use crop wild relatives to improve crops, they must first go through a process called “pre-breeding” to identify and transfer the sample’s desirable traits, such as disease resistance or heat tolerance, but not any undesirable traits. This work is already underway for 19 crops with more than 100 national and international partners in 48 countries. These researchers are using the collected material and other wild relative samples already in genebanks to begin the laborious process of crossing the wild with the domesticated. Farmers are already evaluating some advanced products. For example, more than a dozen farmer seed clubs in the Mekong Delta of Vietnam are currently testing rice derived from crosses with wild cousins.

Collecting for the future

“We have made incredible progress tracking down crop wild relatives that could hold the key to food’s survival,” said Marie Haga, the outgoing executive director of the Crop Trust. “But there is more to be done, and as threats to the world’s biodiversity mount, this work is more urgent than ever. This project is a truly global collaboration that brought together national and international actors for the first time on this scale. It offers hope and a guide for future efforts to save and use the diversity we rely on for our food security.”