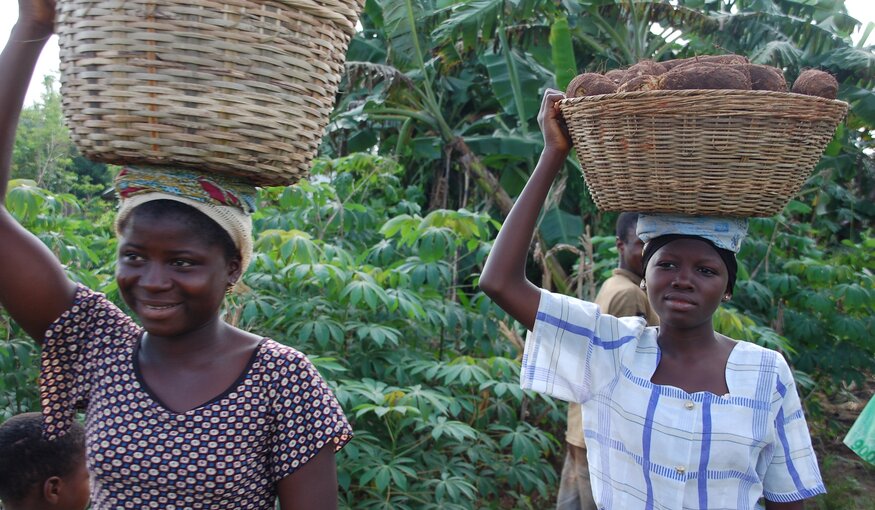 Yet again, citizens of the region of Mahi yesterday celebrated the Feast of Yams. It was held at the Royal Palace of Savalon in the presence of a huge crowd and a group of dignitaries.

“I reiterate, on this solemn occasion, my dedication to leading Savalon to development,” he declared to the highly mobilized people of Mahi.

But first the king ordered them, after consulting the oracle (Fâ) in a ritual lasting some minutes, to eat the newly harvested yam. The tuber’s consumption was prohibited until that moment, the king explained, as the appropriate rituals must be performed to avoid the anger of the gods, bearers of wealth and good harvest in the region. Then as a good peacemaker, the king prayed “that peace may reign throughout Benin.”

He invited all to strive for a peaceful environment so the country can rise.

To demonstrate that the new yam can now be consumed by the people of Savalou, he ended the ceremony by inviting the people and their guests to his palace for a meal made entirely of pounded yam – the sign of a very successful party in Savalon.

The relationship between Benin’s annual yam harvest, its environment and its development is not just a matter for the gods, but also one of soil, fire and biodiversity. The wishes of the late King Tossoh Gbaguidi XIII of Savalon for his subjects just might depend on the yam itself.

Benin’s people rely on natural resources from fragmented forests, which are suffering one of the highest rates of deforestation in the world. Endangered river forests shelter most of Benin’s rich wild diversity, including wildlife like hippopotamus, elephant, bushbuck, duiker, python, and rare endemic primates. These forests provide local people with necessary products, and they act as watersheds for clean water – Savalon’s greatest development challenge. But human activity has destroyed nearly a third of these biodiverse forests since the 1990s, and another 2.5% every year. Sadly, the country’s beloved yam is not innocent in this.

Yam is an excellent, important crop for small farmers in dozens of tropical countries, and the Beninese eat more of the nutritious tubers than anyone else. Yet if grown in the same field for too many years, most yams start to suffer from rising disease and pest pressure and falling soil nutrients. Too often, farmers deal with these limitations by burning patches of forest to open up the fresh soil underneath. With Benin’s growing population, forest species no longer have a chance to recover. Putting the brakes on deforestation means growing more yam, for longer, on the same land – a process called intensification. This is the major goal for yam experts, who aim to spare wild diversity using crop diversity.

Befitting a country of yam connoisseurs, Benin’s University of Abomey-Calavi has become an active center for conservation and distribution. The Laboratory of Agricultural Biodiversity and Tropical Plant Breeding partners with farmers to maintain an organized collection of more than a thousand yam types. With help from the Crop Trust, the laboratory regenerated, expanded and backed up this material, sending duplicate plants to the global yam collection held by the International Institute for Tropical Agriculture (IITA). In the process, every accession was planted in four different zones of Benin to test it against diseases, pests and low nutrients. Farmers joined in the evaluation too, and the strongest yams were multiplied and shared with 30 villages. With easy access to this diversity, Benin’s yam harvest won’t have to come at the expense of its priceless wild ecosystems.