Daniel Debouck, a Belgian researcher who until his retirement a few months ago ran the CIAT genebank, received the Order of Leopold a couple of weeks back. That’s his country’s highest civilian honour, and he looks pretty proud accepting it. 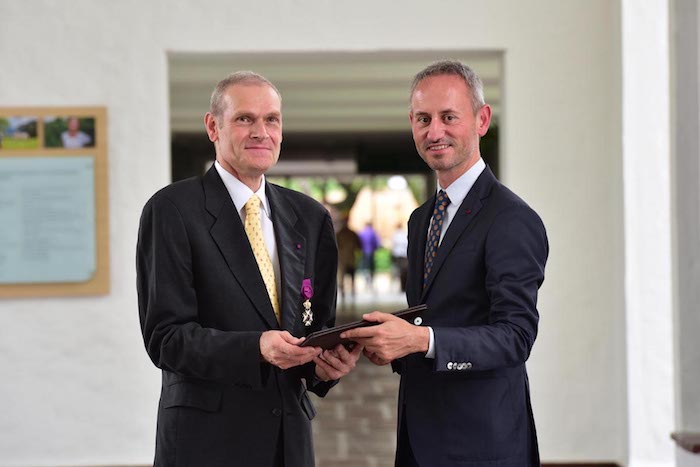 But I’m willing to bet he’s even more proud of something else that happened to him recently: a species of bean has just been named after him in Phytotaxa, a taxonomic journal.

The scientific names of living organisms are made up of two bits: the first part, which is always capitalized, is the name of the genus to which the organism belongs; and the second, which is not capitalized, is that of the species, or the “specific epithet” in the jargon. Both bits need to be italicized — that’s the rule. Think of Homo sapiens. We are just one of several species of Homo that have existed. Incidentally, scientific names do not take a definite article except under very special circumstances. So you could talk of the Homo sapiens we found yesterday, if we had found several, but you wouldn’t say “This is a specimen of the Homo sapiens.” End of nerdy rant.

All beans are Phaseolus something or other, more similar to each other than to anything that is not called Phaseolus. The authors of the Phytotaxa paper explain why Phaseolus debouckii is such an appropriate name for this new species:

The specific epithet honours Daniel G. Debouck, given his scholarly contributions, and extensive and systematic collections of wild and domesticated Phaseolus throughout the Americas. He was the first to discover this species during a field expedition in Peru (Debouck 1989, 1990). Seeds from one of these collections (G 21245) were sent to UC Davis, where allozyme analyses provided evidence of their uniqueness, not fitting in either the Andean or wild Mesoamerican Phaseolus vulgaris. Based on these results, funding for additional explorations in Ecuador and Colombia, were granted. Further analyses on newly collected materials provided additional evidence from which earlier papers by Debouck et al. (1993) and Kami et al. (1995) evolved.

So the beans in question were originally thought to be Phaseolus vulgaris, the wild ancestor of the cultivated common or French bean (and the fact that it has two names just in English is one of the reasons why we bother with scientific names). But it has now been decided that they are different enough from other wild common beans to warrant a new name. Good news for Daniel.

I could use this little story to illustrate the importance of international collaboration in the study of crop diversity. Scientists from Mexico and the USA ended up deciding that material collected by a Belgian in Ecuador and Peru, and thereafter conserved and studied on three continents, represents a new species.

Or I could use it to point out that research in crop diversity can take a long time. Almost 30 years in this case, from first spotting something interesting on an Andean mountainside to the formal acceptance that it represents a new species. Instead, I want to use it to show why the work of genebanks never ends, and can be, well, frustrating.

The material Daniel originally collected went into genebanks under its presumed name, Phaseolus vulgaris. The curators of the genebanks where that material is conserved now have to change the relevant entries in their databases to show it as Phaseolus debouckii. To be on the safe side, they should also probably make sure that other, similar stuff they hold from the geographic area in question has been properly identified. Could it also by any chance be the new species? Needs to be checked, just in case. If seeds of Phaseolus debouckii have been sent out in the past, recipients should maybe be informed. New experiments will need to be carried out to better understand the properties and relationships of the species. It seems to grow in dryer conditions than Phaseolus vulgaris, for example. Could it be used to breed the cultivated cousin to be more drought-tolerant?

And the results of research involving the material will need to be re-evaluated. Take our own work here at the Crop Trust on the distribution of the wild relatives of crops, and gaps in their conservation in genebanks: we’ll need to run the analysis for Phaseolus again at some point, using the updated information.

Don’t get me wrong. I’m happy for Daniel. He deserves the accolade. And who knows what mysteries Phaseolus debouckii will help solve? But a little part me of can’t help wishing the damn thing didn’t exist.

The opinions expressed here are those of the author(s) and do not necessarily reflect the opinions or views of the Crop Trust. The Crop Trust is committed to publishing a diversity of opinions on crop diversity conservation and use.

We'd like to hear from you about this or any of our other articles. Reach out to us with news tips or your thoughts at editor@croptrust.org.