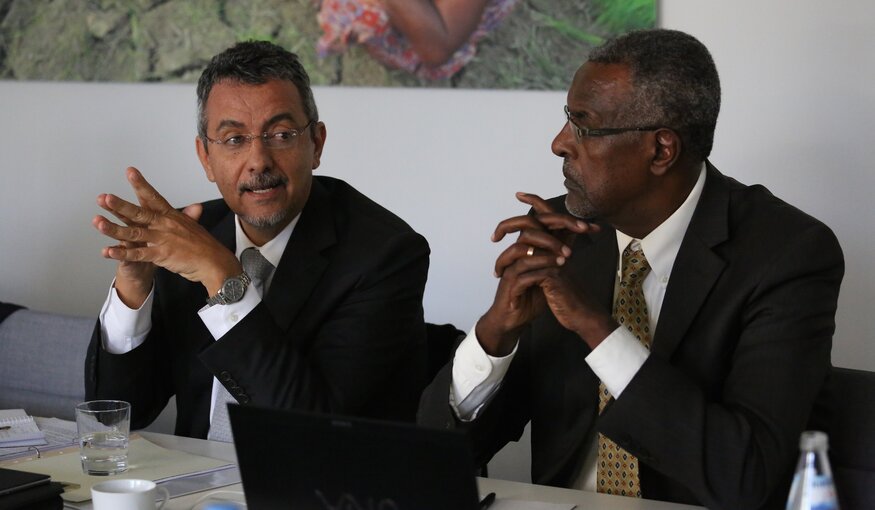 The new members, who were elected by the governing body of the International Treaty on Plant Genetic Resources for Food and Agriculture and by the donor’s council of the Crop Trust, include Lewis Coleman (USA), the president and chief financial officer of DreamWorks Animation; Sir Peter Crane (United Kingdom), dean of the Yale School of Forestry & Environmental Studies and former director of the Royal Botanic Gardens, Kew from 1999 to 2006; Prof. Gebisa Ejeta (Ethiopia), winner of the World Food Prize; Dr. Prem Lal Gautam (India), Presently, Vice Chancellor Career Point University, former chairperson for the Protection of Plant Varieties and Farmers’ Rights Authority for the Ministry of Agriculture in India and Vice-Chair of 5th Governing Body of the International Treaty; Dr. Maurício Antônio Lopes (Brazil), president of the Brazilian Agricultural Research Corporation, Embrapa; and Dr. Mary Ann P. Sayoc (Philippines), the general manager of East-West Seed Company, Inc. and president of the Philippine Seed Industry Association.

Over the next decade, the world’s population is expected to increase by nearly one billion, reaching 8 billion people. By 2050, it may pass 9 billion. Conservative estimates suggest an increase in global food demand over the same period of at least 50 percent.

"Conserving and making crop diversity available provides options. One of these options might just save the future of agriculture and the future of the food we eat," said Marie Haga, executive director of the Crop Trust. “That is why the conservation of crop diversity has been discussed as a possible part of the forthcoming United Nations Sustainable Development Goals.”

“Our common challenge is to produce more—and more nutritious food—and to do so on less land, with less water and less energy, and in an increasingly unpredictable and challenging climate,” Haga added. “A greater diversity of crops, stored in genebanks and available to all through an efficient global conservation system, is required to secure the future food supply at stable and affordable prices.”

By its 10th Anniversary, the Crop Trust has regenerated and rescued nearly 80,000 varieties of crops, funded 75 percent of the deposits stored safely in the Svalbard Global Seed Vault, launched a 10-year project funded by the Norwegian government to collect, conserve and make available the wild relatives of crops grown in our fields today, and raised $170 million for its Crop Diversity Endowment Fund to provide never-ending financial support to the world’s most diverse and used international crops collections.

“Securing the availability of food for a growing global population cannot be left to chance,” said Crane. “Completing the endowment of the Global Crop Diversity Trust is essential to ensure that the world’s most important crops, on which we all depend, will be available in perpetuity. Without access to crop diversity we will be unable to meet the agricultural challenges of the future.”

Ejeta added, “Food security has become an important item on the global agenda for humanity. Where worries abound about the sustainability of our global food systems, investing in seeds and seed systems provides the greatest insurance for the future well-being of human society.”

“Conserving our crops’ genetic resources is critical to guarantee the constant release of new varieties capable of withstanding the multiple challenges facing global food production: gradual changes in temperature and rainfall, pests and diseases, and even natural disasters,” said Dr. Lopes. "Considering this reality, Brazil, through Embrapa, was one of the initial supporters of the Global Crop Diversity Trust, wisely created to guarantee permanent funding of the international seed banks of the CGIAR and others. These institutions are critical to ensure the permanent availability of crop diversity for our sustainable development.”

All the members of the executive board are active in supporting the Crop Trust in fulfilling its mission, and in particular in reaching its endowment fund target. They play a key role in building awareness at the highest levels of the importance of ensuring the conservation and availability of global crop diversity, forever.

“Crop with little or no diversity is nothing but a living fossil,” said Gautam.

“When it comes to food security, you cannot think in short-term cycles,” said Fust. “Politicians need to invest in the future and think beyond their elected period of time. The Crop Trust endowment assures we feed the children of our grandchildren. And those future generations will look back saying, ‘you did the right thing.’”

“I am delighted to rejoin the Crop Trust executive board at a time when ensuring a global system for the conservation of crop diversity has never been more critical,” said Coleman.

Further Information on New Board Members: