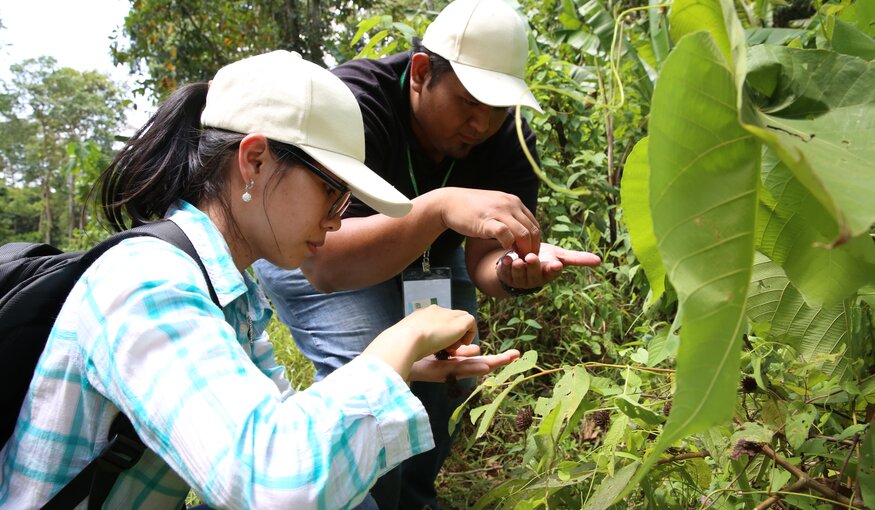 BONN, GERMANY - 21 March 2016 - Many of the wild plants which will be the building blocks for future global food supply are missing from the world’s genebanks, according to new research by the International Center for Tropical Agriculture (CIAT) in coordination with the Global Crop Diversity Trust (Crop Trust) and the Royal Botanic Gardens (RBG), Kew.

These so-called crop wild relatives (CWR) – distant cousins of well-known food crops like rice, potato maize and wheat – are widely recognized as one of the most important resources available to plant breeders in the fight against climate change. But many have not been collected and conserved in genebanks, meaning breeders are unable to use them. In addition, many of their habitats are under threat from urbanization, pollution, deforestation, climate change and war.

CWR possess valuable genetic diversity that can be used to develop crops capable of adapting and thriving under the impacts of climate change, including higher temperatures, increased soil salinity due to rising sea levels, and more frequent and severe pest and disease outbreaks.

Research carried out as part of the Project “Adapting Agriculture to Climate Change: Collecting, Protecting and Preparing Crop Wild Relatives”, which is funded by the Government of Norway, mapped 1,076 CWR of the world’s 81 most important crops. It revealed significant gaps in the world’s genebanks, both in terms of species and regions. Key findings include:

The research published today in the journal Nature Plants compared predicted CWR distributions with records from the world’s genebanks to produce what is believed to be the most comprehensive list of gaps in collections of crop wild relatives to date.

Nora Castañeda-Álvarez, a scientist at CIAT and author of the study, says that the paper “establishes a baseline for how well we are protecting crop wild relatives worldwide.”

“There are big gaps for many crops and in many regions”. She added “it’s now clear that scientists around the world are in a race against time to collect and conserve many of the most important plant species for future food security.”

The authors found that the wild relatives of important food security crops like banana and plantain, cassava, sorghum and sweetpotato are all in urgent need of collection and conservation, along with those of pineapple, carrot, spinach, and many other fruits and vegetables. Even for the wild relatives of vital staples like rice, wheat, potato, and maize – which tend to be better represented in genebanks - there are still significant gaps in the collections.

In addition, they flagged the fact that some of the CWR marked as high priorities for collection and conservation are under threat, from war and civil strife in places like Syria and Afghanistan and from changes in land use, such as deforestation, in southeast Asia.

“The overall level of exposure to risk is really troubling,” says Colin Khoury, co-author and also a scientist at CIAT. “The world’s food supply is in a precarious position of depending on too few crop plant species. For every CWR that’s not conserved in a genebank and available for research, it means there is one less option for plant breeders to improve the resilience of the food crops we rely on so much. “Our findings give us the clearest idea yet of which plants are missing and where in the world we need to search for them."

Ruth Eastwood, Crop Wild Relatives Project coordinator at Kew, agrees. “Although a lot of experts have known about gaps for individual crops, this is the first time we’ve had a comprehensive global overview that is widely available.”

“CWR have provided valuable genetic material in the past and the United Nations have formally recognized the importance of these species in article 2.5 of the Sustainable Development Goals, which includes a call to maintain the genetic diversity of seeds, including crop wild relatives, in genebanks by 2020.” says Hannes Dempewolf, the manager of this project.

The study also revealed some areas where CWR are relatively well collected, for instance for wheat, chickpea, tomato, soybean, and rice. These samples have already proved valuable in past plant breeding efforts. For instance, genes from a wild rice species Oryza nivara were instrumental in helping to develop rice varieties resistant to the grassy stunt virus, a disease that caused hundreds of millions of dollars of damage to Asian farmers in the 1970s, while a single wild tomato species provided genes boosting solids content by 2.4%, estimated to be worth about US$250 million a year to the global tomato industry.

With financial support from the Government of Norway, the Crop Trust and RBG Kew are managing to fill the gaps and secure the future of the world’s food supply. The analysis that resulted in the new map is part of this joint effort and fed into a prioritization of where new collecting efforts would be most effective. So far, agreements with partners in 15 countries[1] are in place, and the Project is providing support and help to those partners to collect these CWR, conserve them in genebanks and make them available for research and breeding. The Crop Trust hopes that this work will encourage additional countries to become more willing to share their plant collections.

According to Luigi Guarino, Director of Science and Programs at the Crop Trust, the analysis and map may also prove useful for discussions of genetic resources policy. “A country may be surprized to be a high priority for collection as it already has samples in its national genebank. Due to this study it could realise that these collections are not widely known and it can take steps to change this. What good is it if you have it, but it’s not available and nobody knows it is there?”