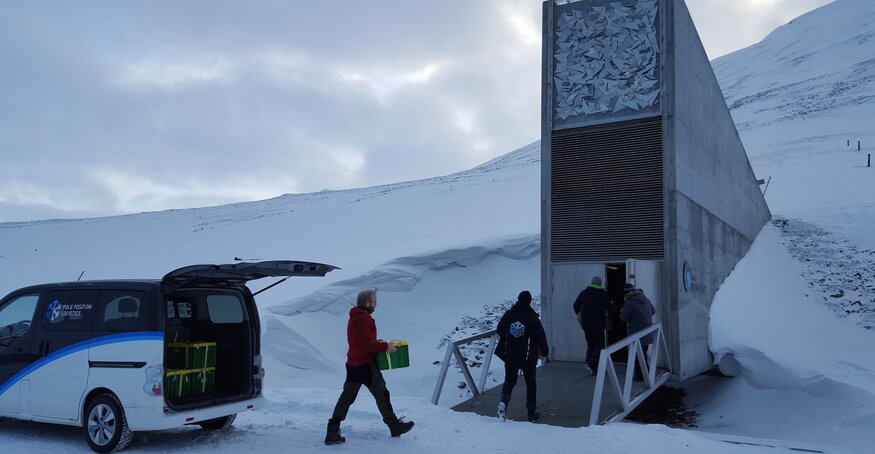 The University of Okayama in Japan and Seed Savers Exchange, an American NGO based in Iowa, deposited yesterday important samples of barley, tomato, and other vegetables into the Svalbard Global Seed Vault.

Seeds deposited include some of the world’s most celebrated crops, such as sunflower, squash, tomato, watermelon, carrot and barley. This is the first major deposit since October 2015, which saw seeds arriving from CGIAR outposts in the Philippines, India, Nigeria and Peru.

The seeds were flown from their respective gene banks to the Svalbard Airport, where the seeds were stored in cold conditions. At the airport, seeds were scanned as part of routine security measures, and sent on their way to the Vault.

The deposit includes 435 varieties of vegetables deposited by Seed Savers Exchange. Seed Savers works with artisanal and historic growers in the USA to protect heirloom seeds that have been cultivated through generations, often by amateur agriculture enthusiasts. For example, one of the seed samples, the Tony Scavo Horn of the Bull pepper from Iowa, was given to Seed Savers for back up by the friend of an elderly Italian-American, Tony Scavo, whose family had grown the crop since his father brought it over from Italy many years ago.

There are also 3094 varieties of barley being deposited by University of Okayama in Japan.  Barley is the fourth most important cereal crop in the world after wheat, maize, and rice. Although generally a temperate crop, barley is also grown in many tropical countries, typically by poor farmers in hostile, dry, cool environments and remains a very important crop for securing future food security.

The Vault is buried deep inside a mountain on a Norwegian archipelago, about 1,300 kilometres/810 miles from the North Pole. It is the world’s largest collection of biodiversity, with more than 850,000 varieties of seeds. The Vault stores duplicates of seed samples held in genebanks all over the world, which could hold the key to developing the new varieties we will need to feed ourselves in an ever changing climate.

The Vault was the brainchild of renowned conservationist Cary Fowler, in association with CGIAR, who saw the need for a ‘backup to the backup’ to preserve a wide variety of seeds samples, or ‘spare’ copies held in genebanks worldwide. Genebanks are vulnerable to war or natural disaster, and the Svalbard Global Seed Vault acts as an insurance policy for when catastrophe strikes.

The importance of the Vault was demonstrated late last year when the Syrian civil war forced the first withdrawal from the Vault. Seeds that had originated from ICARDA’s genebank in Aleppo were sent to other facilities in Morocco and in Lebanon so that the collection could be re-established.

Under terms spelled out in a tripartite agreement, the Vault is managed  between the Norwegian government, the Nordic Genetic Resource Center (NordGen) and the Crop Trust.

The Crop Trust provides support for the ongoing operations of the Seed Vault, as well as funding for the preparation and shipment of seeds from developing countries to the facility. The Nordic Gene Bank (NordGen) operates the facility and maintains a public on-line database of samples stored in the seed vault.

The Crop Trust is seeking to raise $850m for an endowment fund to secure its long-term future and continue providing support to the Vault.  A crucial Pledging Conference is taking place 15 April 2016, which the Crop Trust hopes will mark a major milestone in safeguarding global food supplies forever.

The need for new crop varieties that can withstand these ever-growing challenges is now widely recognized and is frequently cited in climate change discussions. These are essential not only to reduce hunger but also to strengthen global food security in the medium- and long term.

"The development of crop varieties that can cope with heat, drought, flood and other extremes may well be the single most important step we can take to adapt to climate change. Help us as we race to rescue crop diversity in danger of disappearing forever."