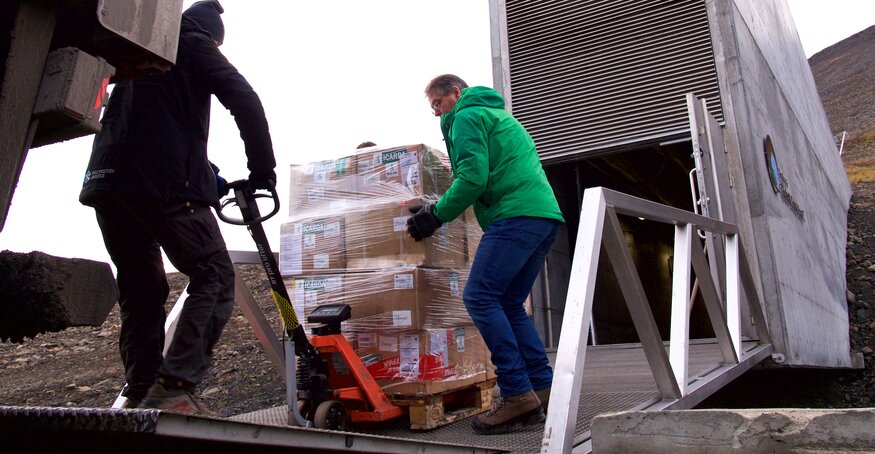 Precious seeds that had originally been sent by the International Centre for Agricultural Research in the Dry Areas (ICARDA) for safeguarding in the Svalbard Global Seed Vault in the Arctic Circle, were safely delivered to Morocco and Lebanon today, having undertaken a 10,000 kilometre roundtrip. These seeds could hold the key to developing new crop varieties crucial to meeting world food demands with climate change.

The seeds will be used by ICARDA to fulfil requests for crop diversity from breeders, researchers and farmers around the world, so they can develop and test new strains to cope with a changing climate and new diseases.

The first of several retrievals to happen in the years ahead, the shipment contains 128 boxes with a total of 38,073 seed samples, which will be planted during this and next year’s cropping seasons. A total of 57 boxes containing forages, faba beans, lathyrus, and the wild relatives of cereals and pulses (8840 accessions) were sent to Lebanon and 71 boxes containing accessions of cultivated wheat, barley, lentil and chickpea (29,233 accessions) were sent to Morocco. A total of 350 boxes were originally sent to Svalbard.

Each sample will be planted and grown at ICARDA’s facilities to provide duplicate seeds, which will be used to re-establish the ICARDA active collection, and also be returned to the Seed Vault for safekeeping.

The seeds in ICARDA’s care are a globally important collection with 65 percent as unique landraces and wild relatives of cereals, legumes and forages collected from regions such as the ‘Fertile Crescent’ in Western Asia, the Abyssinian highlands in Ethiopia and the Nile Valley where earliest known crop domestication practices were recorded in civilization. These ancient varieties have developed naturally robust genes from thousands of years of survival, adaptation and evolution – a valuable resource for building climate resilience in crops.

The seeds were originally stored at ICARDA’s genebank in Aleppo, Syria. The conflict has made it increasingly difficult for ICARDA’s staff to ensure that material can be regenerated and distributed to users around the world.  Whilst the seed cold store is still operational, ICARDA staff are not able to use the surrounding land to replenish seed stocks, a vitally important aspect of its work for an organisation that normally distributes around 25,000 samples every year to partners

This is the very first time that seeds previously deposited for safekeeping in the Svalbard Global Seed Vault, the world’s ultimate failsafe facility for crop diversity, have been retrieved, less than 10 years after the Vault opened. Buried deep in the permafrost on a remote Arctic archipelago, the Seed Vault currently holds more than 860,000 samples of seeds from almost every country in the world.

The shipments from Svalbard to Morocco and Lebanon have been entirely funded by the Global Crop Diversity Trust (Crop Trust), which is also a partner in the operation of the Seed Vault with the Government of Norway and NordGen.

The Crop Trust’s mission is to conserve the planet’s crop diversity for the food security of current and future generations.  A recent study co-authored by the Crop Trust found that the planet’s food supply has grown increasingly dependent on only a few crop types over the past 50 years. Climate change will affect the ability of these crops to thrive, and pressure will increase on the food system as the global population continues to increase.

The Crop Trust is working to establish, fund and manage a global system for the conservation of crop diversity. ICARDA is one of the 11 international genebanks that is part of this international system. Recently, The Economist argued, “preserving the genetic diversity that remains would be an excellent investment.” ICARDA’s investment into the Seed Vault and the Crop Trust’s vision for a global system for crop conservation serves this exact purpose.

Out of the terrible adversity that the people of Syria are facing, the retrieval of ICARDA’s seeds from the Svalbard Global Seed Vault is a welcome piece of good news. This proves that the measures the global community are putting in place to preserve crop diversity for future generations actually work.

In one sense, it would be preferable if we never had to retrieve seeds from the Seed Vault, as a withdrawal signifies that there is a significant problem elsewhere in the world.  However, we can now see that the Vault as the ultimate failsafe works the way it was intended to do. Now ICARDA can continue working with other partners to develop the crops that will feed people in the Middle East and in other regions around the world for the future.

We are delighted to be able to retrieve these seeds, so that ICARDA can continue to play a vital role providing highly valuable genetic resources to our partners, particularly in national programs and in the ongoing work to preserve crop diversity and meet the challenges we all face – natural and man-made – to feed future generations.

We have long enjoyed a positive and productive working relationship with the Crop Trust and the highly-valued continuous support to ICARDA work in genetic resources; and it is immensely encouraging to see first-hand that the measures we have all collaborated on to back-up our seed collections work so effectively when finally called upon.

It is wonderful to see the Vault is already proving its worth, and that we have been able to help our friends in the Middle East to continue their vital work.

This is proof that the global system is working.  ICARDA, NordGen and the Crop Trust have collaborated closely over several years on the deposit of seeds, and will continue to do so as the seeds are now used to re-establish the ICARDA active collection.