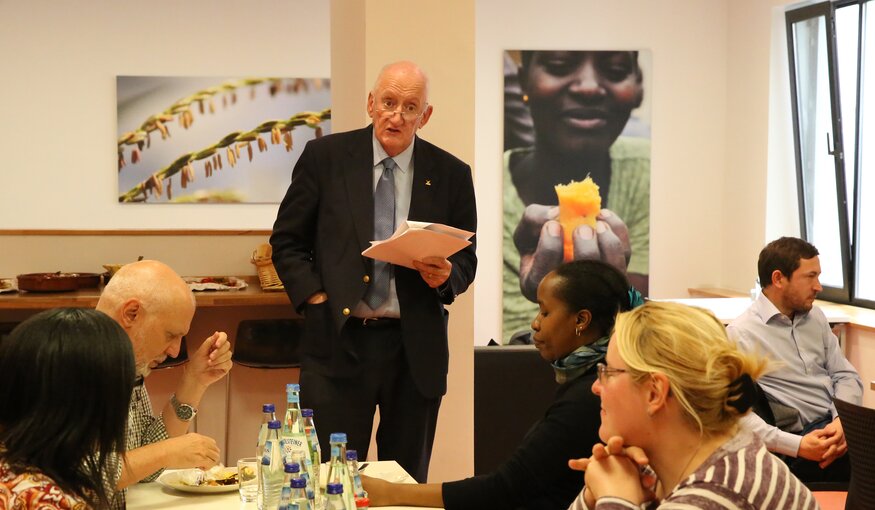 (BONN, GERMANY – 27th June 2018) - Australia’s former Deputy Prime Minister, Tim Fischer, has been elected for a second term as Executive Board Chair of the Crop Trust.

Tim received endorsement to serve until 2020, during a recent meeting of the Crop Trust Donors’ Council in Bonn, Germany.

Tim joined the Crop Trust as Executive Board Chair on 1st January 2018, following five years as a board member. Tim has been a long supporter of the work of the Crop Trust and humanitarian causes, and has a political career spanning four decades.

“I’m delighted and honored to continue as the Crop Trust’s Executive Board Chair,” said Tim, following the announcement. “Of all my years in politics and agriculture, one thing to me is abundantly clear: we won’t respond to the challenges of sustainably producing enough nutritious food for a growing world population, unless we look after seeds that form the foundation of our food supply.

“Through its endowment fund, the Crop Trust provides the world with a wonderful opportunity to conserve crop diversity forever. It’s a privilege to continue to support its efforts to achieve this goal.”

Tim began his political career in 1971, after returning from deployment in Vietnam where he was as an officer in the Australian Army. He was a New South Wales Parliamentarian (1971–1984) and later an Australian Parliamentarian (1984–2001). Throughout the 1990s, he was the head of the National Party of Australia. During this time, he also served as Minister for Trade and Deputy Prime Minister in the Howard Government, holding both positions from 1996 to 1999. He then served as Chairman of the Crawford Fund (2001–2006), supporting international agricultural research. He is also a consultant, author, broadcaster and former Ambassador in Rome.

“Tim has long been a supporter of the Crop Trust, and has been a tireless advocate of crop diversity,” said Marie Haga, Crop Trust Executive Director. “I speak on behalf of the whole of the Crop Trust and the Executive Board when I say that we are thrilled that he will continue for another two years.”

Tim’s first six months as Executive Board Chair saw him join a Crop Trust-led delegation of industry leaders, celebrities and politicians at a special luncheon hosted by the Crop Trust’s

Global Patron, HRH The Prince of Wales, in London, UK; the International Seed Federation’s World Seed Congress in Brisbane, Australia and various other meetings with donors and partners.

The Crop Trust is an international organization working to support crop conservation in seed banks, forever. It supports international seed banks, national seed banks and the world’s backup facility, the Svalbard Global Seed Vault. The Crop Trust allocates funds to support these seed banks through its Endowment Fund – a self-sustaining fund that generates investment income for crop conservation. The Crop Trust is recognised as an essential element of the funding strategy of the International Treaty on Plant Genetic Resources for Food and Agriculture. www.croptrust.org. Like our Facebook page or follow us on Twitter.