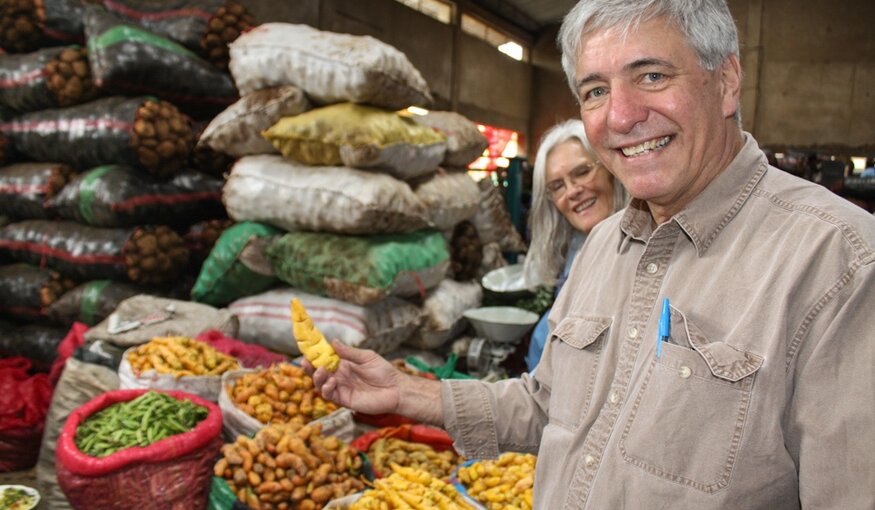 Dr. Ellis in 2013 holding up one of the many varieties of potatoes he studied during his career. (Photo: Charlotte Lusty/Crop Trust)

Recipient of the inaugural Crop Trust Legacy Award David Ellis was once asked how to prepare for a career as a genebank scientist. “There’s no fricking way,” he responded. “You not only have to be well grounded in science but you also need to know how to manage budgets and people and how to essentially run a business.”

David, who has just retired as leader of the International Potato Center’s (CIP) genebank in Lima, Peru, has had a taste of all of that in his career. The entrepreneurial botanist who co-founded forestry biotech startups and created a “self-illuminating Christmas tree” (a fantasy story involving a firefly luciferase gene in a Douglas fir cell culture) eventually became the manager of one the world’s most important collections of potato diversity.

David argues that genebank managers need to balance science with the management of their collections. “If you focus purely on the science, then management of the genebank suffers,” he says. “If you focus solely on being a genebank manager, then you are never viewed by your scientific peers as a research scientist and that can mean fewer opportunities for collaboration.” It is a hard balance to achieve but it would seem that David has done it.

David’s life-long interest in plant biodiversity has taken him on a career path that has traversed academia, private industry, and public service. He worked in timber sales in the mountains of Montana for the US Forest Service while completing undergraduate degrees at the University of Montana (BA in Botany and BSc in Forestry, both with honors). He completed his Ph.D. in Botany at Montana before taking a position as a research scientist with Agrogen Biotechnologies in Vancouver, Canada.

Within a year, David and six of the scientists at Agrogen found themselves on the street when they discovered the lab doors chained shut one morning and a notice on them announcing the company’s bankruptcy. David and several of his colleagues rapidly regrouped, though, and founded the Forest Biotechnology Centre, an interdisciplinary contract research company dedicated to applying the latest technologies to enhancing forest regeneration.

In 1988, David returned to academia, taking a position as an associate scientist in the Department of Horticulture at the University of Wisconsin-Madison, where he remained for seven years. In 1996, he returned to the Forest Biotechnology Centre that he had helped found nearly a decade before and became its Biotechnology Director. In 2000 he was a founding scientist at another plant biotech start-up, CellFor Inc, which became a leading producer of elite clonal conifers, selling somatic seedlings developed for reforestation to clients in North America, South America, and Australasia.

From Biotech Startups to Genebanks

With CellFor up and running, David chose to leave the private industry, trees, and the scenic west coast of Canada in 2004. He moved to Fort Collins, Colorado, to take up a position with the US Department of Agriculture’s Agricultural Research Service (USDA-ARS). He was responsible for curating and overseeing daily operations of one of the world’s largest genebanks at the National Center for Genetic Resources Preservation, the backup facility for the US National Plant Germplasm System. This houses a collection of over 2,000 genera and 15,000 species of plants. In 2012 he moved on to become head of the genebank at CIP, until his retirement in July 2018.

David’s extensive background in the private sector gave him first-hand experience of how the industry can use plant genetic resources to generate income. For example, he worked on genetic engineering and propagating trees with highly desirable qualities, such as pest resistance, reduced or enhanced cellulose production, and altered wood chemistry.

In 1989, David and his colleagues at the Forest Biotechnology Centre published results that showed that white spruce (Picea glauca) and other conifer species could be transformed by Agrobacterium – a group of bacteria used in genetic engineering to transfer genes into plants. “Many in the mainstream at the time said Agrobacterium wouldn’t infect conifers.” However, David and his team not only used Agrobacterium successfully to infect Douglas fir (Pseudotsuga menziesii), they also introduced a functional gene for a bioluminescent protein (firefly luciferase) into Douglas fir cells. “Although the cells would not produce enough light to see with your naked eye, for many years after we published our results, some journalist would pick up the story at Christmas about the tree that lights itself.”

Keen to accelerate tree breeding for forestry, David adapted a method for transforming gymnosperm embryos by bombarding them with microprojectiles – small gold particles carrying DNA fragments. The method was patented in 1997. David is also a co-inventor of a patented process for enhancing cellulose production in plants, making trees denser and thus essentially producing more wood.

David eventually brought these inventive talents to the world of genebanks. While with the USDA-ARS, he not only initiated the USA’s involvement with the Svalbard Global Seed Vault, he designed the white storage boxes that are often seen in images inside the vault. He contributed to the conceptual development of the USDA-ARS’s Germplasm Resources Information Network (GRIN) database so that it could manage details relating to access and benefit sharing a decade before the USA became a Contracting Party to the International Treaty on Plant Genetic Resources for Food and Agriculture (ITPGRFA).

While at CIP, David overhauled the potato cryobank, creating a large team of skilled technicians who have brought plants into cryopreservation at a rate and scale never seen before. David also secured funding to genotype the entire potato and sweetpotato collections, providing an invaluable resource that can be used to better understand and manage the collections. He also played a major role in leading the CGIAR-Crop Trust Genebank Platform as an elected member of the Management Team for three years. His insights in, and knowledge of, the international plant genetic resources policy arena were especially valuable to the MT.

The Future of Genebanks

David is acutely aware of the challenges that genebanks face now and in the future, as many are the same challenges he has faced during his career: securing funding; maintaining relevance; keeping pests and diseases at bay and generating information that others will find useful. However, despite these challenges, David is optimistic for the future.

“The genebank community is changing, due in part to shifting attitudes to international policy and in part to a small group of individuals, including my retiring colleagues and those replacing them,” David said. “We are getting good integrated genebank systems that have informative public databases and reliable systems for access to the collections.”

In terms of having the right people for the job, David is concerned about the lack of apprenticeships and training programs in place but is still convinced that plenty of talent exists out there. “I think we just need to package what we offer better.”

It takes a certain type of person to run a genebank, and in David’s opinion this isn’t necessarily the cutting-edge scientist, but a good researcher capable of dedicating themselves to both science and service. “Genebank management is a great mid-career choice for someone with a strong research, teaching or industry background,” said David.

David has certainly left his entrepreneurial imprint on the genebank community and has fostered a culture of can-do perseverance that will stand it in good stead. Rather than talk about what he’ll be doing in his retirement, he prefers to talk about his successor at CIP, Noelle Anglin, and how fortunate he feels to leave CIP’s genebank in the hands of such a talented scientist who shares his desire to continue to improve genebank management and the use of plant genetic resources for the benefit of humanity.