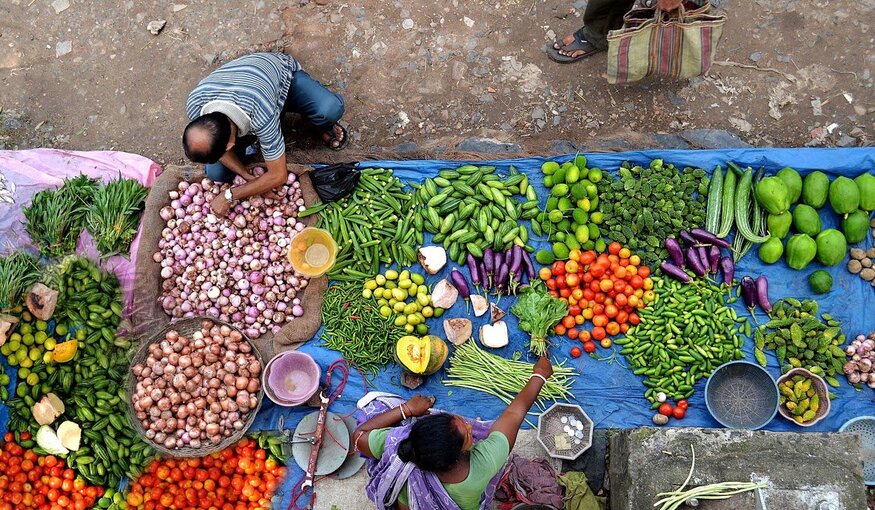 When the first Model T rolled off his assembly line, Henry Ford revolutionized the economy.

Industrial mass production became an essential feature of the 20th century and laid a foundation for the prosperity that followed—never before in human history have the fortunes of so many improved so rapidly.

More than a century later, standardized mass production is enmeshed in every industry—including agriculture and food. This helps businesses exploit economies of scale, stay ahead of competition, and offer cheap food to consumers.

But how cheap is this mass-produced food, really? I was recently inspired by an opinion piece written by former Crop Trust Executive Board Member Alexander Müller in Landscape News. He looked at the real cost of “cheap” food. It turns out the price you pay at your local grocery store is deceptively low.

There is an abundance of technical prowess that goes into industrializing and rationalizing our food. From the companies that sell seeds and fertilizer to farmers, to the producers who buy the raw ingredients and process them, and, finally, to the consumer, this seemingly efficient system has contributed significantly to our prosperity.

In 1960, for example, the average wage earner in West Germany still had to work 51 minutes to buy ten eggs. Fifty years later, it was only eight minutes. For a kilogram of pork chops, the working time in 1960 was 2 hours and 37 minutes., down to a mere 32 minutes 50 years later.

Like any industry, the agri-food industry produces large quantities for large markets for a small price. Food has never been as cheap for so many as it is today.

Despite cheap food, though, 690 million people are hungry and 2 billion people suffer from micronutrient deficiencies, often called hidden hunger because the food they consume doesn’t adequately nourish them. The main cause of this global systemic failure is poverty. For these people, the so-called “cheap” food on the world market is still too expensive, often far too expensive.

So, do we need even cheaper food to overcome hunger and hidden hunger in the world? No, in fact, the opposite. There are many reasons for this, but let’s examine the most important two.

First, most hungry people in absolute poverty live in rural areas. The majority of them —often smallholder farmers—produce food. Only an increase, not a further decline, in food prices can help them escape the poverty trap. Globally, if we value the work these farmers do—and the plant diversity they conserve, grow and harvest—and if they receive commensurate compensation for the diverse crops they produce, we all stand to benefit.

Only an increase in food prices provides incentives for smallholders to invest in the future of their agriculture, to invest in good seed, irrigation and small machinery—tools and technology that will improve their yields and help lift them from poverty

Second, current market prices do not tell us the truth about the total cost of producing food. The fact is that there are many costs that you don’t see on your grocery bill. By externalizing some of the costs of production, current food systems are prompting a reduction in diversity. The prices we see do not reflect the burden these production methods place on our natural world. They do not capture the costs of cutting down a forest for farmland or those of the greenhouse gases released by intensive farming.

No, the true cost of cheap food, and of the intensification of agriculture that makes it possible, is one that the poorest among us bear in the areas of the world most affected by climate change. It’s one which our children and generations after them will pay for in a loss of biodiversity, and a loss of land and water no longer fit for farming.

The reduction of diversity and complexity in favor of ever-increasing simplicity are a great risk. Our planet’s vast biological diversity provides insurance against the changing climate. In the face of accelerating biodiversity loss, the Crop Trust’s Crop Wild Relatives Project highlights the importance of harnessing the wild relatives of domesticated crops to breed new, hardier varieties that can withstand the effects of the changing climate.

The initiative is well on its way to bringing new climate-smart crops to farmers.

Our Seeds for Resilience project helps five national genebanks in Africa conserve and share their collections of crops like sorghum, millet and cowpea with scientists and farmers to develop more resilient, productive and nutritious crops.

And, of course, the Crop Trust supports the Svalbard Global Seed Vault, the world’s backup for crop collections.

As our planet continues to change in ways we can in many cases only guess at, it’s critical that we conserve the biological diversity we still have as a means for future adaptation.

The current economic model of low food prices may make some foods more accessible for many middle-class consumers in the world's growing cities, but the model also has many losers who are left out of the financial equation altogether.

Everything has its price, including diversity. It’s time we recognize its inherent value and reflect it in our food.