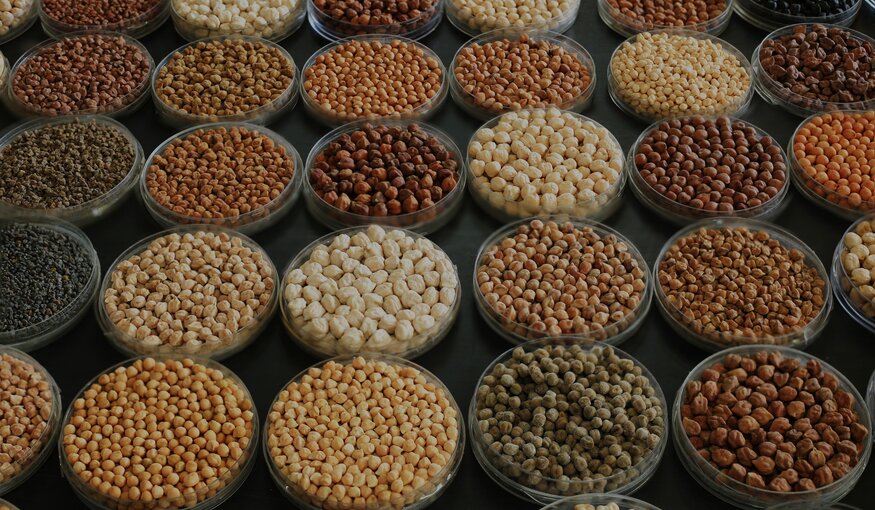 Genebanks are sometimes caught up in unexpected events. Natural catastrophes, pandemics, wars and other crises can jeopardize their unique genetic holdings at any time.

That’s why it pays to have a backup plan in place.

Safety duplication provides such a safety net through the storage of a duplicate set of seeds or other plant materials at a location distant from the original collection, preferably outside its host country. If disaster strikes, genebank staff can then access these reserves to regenerate their collections without risking permanent loss.

The backup process involves several stages. The first is to regenerate enough seed for the backup. Then the regenerated seeds are shipped, normally to two different host institutions, as safety duplicates.

So-called “first-level” safety duplication goes to another genebank that can store the material under long-term conditions; “second-level” duplication is at the Svalbard Global Seed Vault, the ultimate backup for seeds. In both cases, the seeds are stored under a “black box” system, meaning that the receiver is not able to access the seeds themselves or even open the boxes. They only store the materials.

“Risks are carefully managed in most genebanks, but sometimes there is little anyone can do to predict or plan for events. The only solution is to plan for the worst and make sure a collection is properly backed up,” says Charlotte Lusty, who coordinated the Genebank Platform at the Crop Trust.

The International Crops Research Institute for the Semi-Arid Tropics (ICRISAT) in India has already duplicated the collections under its management in Svalbard. First-level duplication, however, is still important because the Seed Vault opens its doors just once or twice a year and can only store and return large volumes of seeds to depositors. ICRISAT is therefore completing the first-level duplication of its collection.

“We already have about 95 percent of our germplasm backed up in Svalbard. However, to reach our operational targets we must also duplicate in another location,” says Kuldeep Singh, who heads the ICRISAT genebank in Hyderabad, India. “Ideally, we don’t want to touch the black boxes in Svalbard at all. So, if we need to access any duplicated samples, we want them to come from the first-level duplication.”

ICRISAT focuses on 11 crop species and has breeding programs for six of them: sorghum, pearl millet, groundnut, pigeonpea, chickpea and finger millet. Its research on dryland crops aims to develop varieties with greater resilience to the droughts, floods, disease and pests that are becoming increasingly troublesome with climate change.

The ICRISAT genebank holds around 128,000 seed samples and aims to duplicate more than 90 percent of them within 2 years, according to Singh.

“The main challenge is to identify genebanks that have sufficient space in their cold rooms to house the black boxes,” he says. “Every genebank has limitations, and those with the most reliable long-term conditions have large collections of their own to conserve.”

If negotiations are successful, ICRISAT plans to store duplicates in several genebanks in different locations worldwide. An agreement is already in place with the International Institute of Tropical Agriculture (IITA) in Nigeria to host about 42,000 samples of sorghum and 24,000 samples of pearl millet.

“When IITA receives its import permit, we will be shipping the first consignment of 20,000 samples from India,” Singh says. “We prefer to send them in batches instead of all in one go to spread out the potential risks involved in shipping. The first one will be sent by the end of 2021.”

Partnerships in the Making

ICRISAT also aims to conclude an agreement that would enable it to send  groundnut and pigeonpea accessions to one of the genebanks managed by the United States Department of Agriculture, and it is pursuing similar arrangements with the IPK Leibniz Institute in Germany and the World Vegetable Center in Taiwan for storage of chickpea and small millets, respectively.

The International Center for Agricultural Research in the Dry Areas (ICARDA) will also be a likely partner, after its new genebank facility in Rabat, Morocco, is completed in early 2022.

National genebanks in Germany, Japan, Korea, India and elsewhere also play a role in hosting safety duplicates from other countries.

A Path to Enduring Security

Safety duplication is a process that requires a great deal of time, effort and financial resources. But it has proven time and again to be worth the effort.

For example, ICARDA’s genebank in Tel Hadia, Syria, was one of the first to deposit plant materials in Svalbard in 2008. By the time civil war spread throughout Syria in 2012, more than 90 percent of the genebank’s seeds were safety duplicated, allowing staff to regenerate the collection at ICARDA’s new locations in Lebanon and Morocco over the following years.

ICRISAT receives a long-term grant (LTG) from the Crop Trust’s Endowment Fund to cover a portion of the genebank’s basic operational costs. First-level duplication is the next step to fulfilling the requirements to secure a long-term partnership agreement (LPA), which would fully fund the genebank’s core operations in perpetuity.

Eight genebanks in the CGIAR network currently have LTGs with the Crop Trust, while one—the International Rice Research Institute (IRRI) in the Philippines—has an LPA.

“LTGs and LPAs mean that genebanks can spend less time raising funds for basic operations and more time and resources on understanding and identifying important traits in the diversity they conserve,” Singh says. “We are working hard to fulfill this important next milestone for our genebank.”