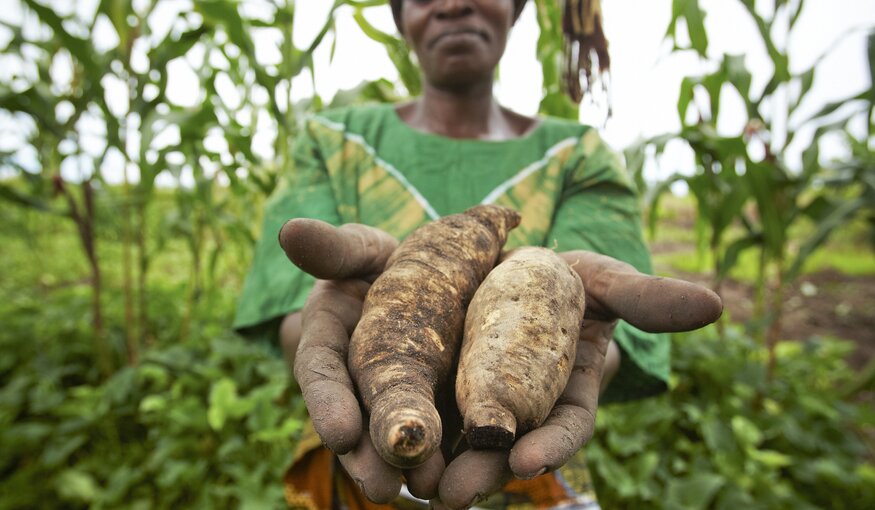 Maria Mtele holds recently harvested orange-fleshed sweet potatoes in a field in Mwasonge, Tanzania. Maria is a mother of 5 and farmer in Tanzania who relies on farming for food and income. Through a local agricultural program, Maria learned about a new crop of orange-fleshed sweet potatoes, specifically bred to thrive in sub-Saharan Africa. They taught her about soil irrigation, crop multiplication, and how to get her crops to market. She is now a leader in her farming group and teaches others what she?s learned. Maria increased her families? income and she is using this new income to build a new, sturdy home.

The Crop Trust has signed an agreement with Zambia’s national genebank under the Seeds for Resilience Project to help safeguard the country’s crop diversity and make it more accessible to farmers, breeders and researchers.

The new commitment comes only weeks after a similar multi-year agreement was concluded with Kenya’s national genebank under the same project, which is working with five African countries in their efforts to conserve their plant genetic resources.

Seeds for Resilience is funded by Germany’s Federal Ministry for Economic Cooperation and Development (BMZ) through the KfW Development Bank.

“We are delighted to be part of the S4R program as it will help us improve our germplasm collections,” says Graybill Munkombwe, who manages the National Plant Genetic Resources Centre (NPGRC), the national genebank of Zambia.

“This new partnership will help us meet international conservation standards while opening up new opportunities for farmers,” adds Munkombwe.

The formalization of closer ties builds on the Seeds for Resilience Project’s recent support for the Zambian genebank’s new sweetpotato collection.

The NPGRC—which currently conserves 6,439 accessions of over 40 different crops—lost its holdings of sweetpotato about 10 years ago due to disease and the lack of a functioning irrigation system.

Introduced to Africa in the 16th century, sweetpotato plays an important role in Zambia’s food and nutritional security, ranking first among tuber crops and sixth among all food crops in terms of total area planted.

Used both for human consumption and as animal feed, sweetpotato offers a good source of calcium, iron and potassium as well as vitamins A, B and C. The crop is especially popular among the country’s smallholder farmers, particularly women.

The establishment of a new sweetpotato collection was based on recommendations from an independent technical review carried out in 2019 in the initial stages of the Seeds for Resilience Project.

“Re-collecting and properly conserving sweetpotato is vital to our national conservation and nutritional security strategies, ensuring that local varieties are perpetually safe and in circulation, for posterity and for crop improvement purposes,” says Masiye Tembo, a research officer at the NPGRC.

Even as the COVID-19 pandemic continued, the NPGRC’s five-member team managed to visit three of Zambia’s ten provinces and collect a total of 208 accessions in April 2021—no easy feat.

The collecting process is expensive and time-consuming, involving the planning of many individual trips, while special care must be taken with the materials in transit. Seeds for Resilience funding covered many of these costs, enabling the mission to take place.

“With the help of the Crop Trust, this collecting program has already accomplished its goal of providing a cushion against the potential loss of neglected local varieties,” Tembo says.

Currently, the samples collected are being used to re-establish a field genebank as sweetpotato, unlike many crops, cannot be reliably conserved as seeds.

Next, the NPGRC will evaluate the samples for useful characteristics and explore means to develop and send duplicates of unique samples to other genebanks as a backup. The evaluation information also helps plant breeders to develop new crops that can better withstand disease, pests and future climate conditions.

“The unique diversity of sweetpotato in Zambia is not currently available in the international germplasm collection housed at the International Potato Center (CIP) in Peru,” says Nora Castañeda-Álvarez, Seeds for Resilience Project Manager at the Crop Trust.

“It is therefore vital to collect and conserve sweetpotato diversity in national genebanks and ensure it is accessible to the farmers, local breeders and scientists who can use it right now. But we must also ensure the diversity in this new collection will be safety-duplicated so that it’s available for future generations too.”

The plan now is to plant the tubers in evaluation plots and ask farmers to select which varieties perform better than those that they are currently using or are otherwise interesting to them.

“We hope to give back new diversity to smallholder farmers in all three provinces so the useful properties in the collection can contribute to food and nutritional security while also raising household incomes,” says Tembo.

Seeds for Resilience is expected to sign further agreements with the national genebanks of Ethiopia, Ghana and Nigeria soon.