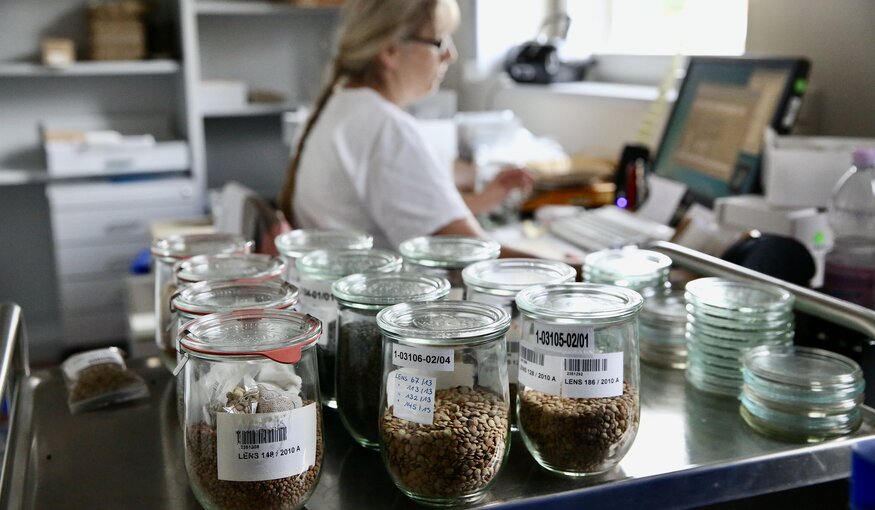 Have you ever wondered what a genebank does? The short answer is that genebanks store genes. Not literally, although there are some specialized genebanks that do manage genes – the actual bits of DNA that give living things their distinct characteristics.

The vast majority of genebanks contain living things, or parts of them, such as seeds, which themselves contain the collection of different genes that make each plant variety or animal breed unique. Genebanks ensure that these genetic materials are safely conserved and available for people to use.

The most common type of material in genebanks is seeds, many of which have evolved to last a long time if they are kept cool and dry.

Some plants have seeds that cannot be dried and cooled for storage. These plants are often conserved as small plantlets, growing very slowly under specialized conditions in test tubes in an in-vitro genebank, or else frozen in liquid nitrogen. Others, like fruit trees, can be conserved as adult living specimens in a field genebank. That is also true for livestock breeds, although eggs and sperm are also cryopreserved for the long term in liquid nitrogen.

Why We Need Genebanks

The diversity genebanks contain is the foundation on which we build the future of our food systems. Specific genes are what make a crop variety resistant to heat and drought, for example, or tolerant of pests and diseases, and are, therefore, the basis of agricultural adaptation.

If farmers and breeders are to respond to the climate emergency, they need access to diversity that might contain the solution to their problem. And yet, modern agriculture means that the diversity created by generations of attentive farmers is being lost. Hence the need to conserve as much of that diversity as possible, because once lost, a crop variety or livestock breed is gone forever.

That is just one difference between a genebank and other banks; genebank deposits are alive, which has consequences.

Genebanks need to ensure that their holdings remain alive, which requires appropriate technology and processes to check the viability of samples (during which scientists test whether a plant would be able to grow into a productive plants) and produce fresh material, if necessary. It also means that genebanks need good backup systems, sending duplicate samples for safe keeping in other genebanks and, ultimately, in the Svalbard Global Seed Vault in the Arctic Circle. Even in the best genebanks, things can occasionally go disastrously wrong.

Right now, you are lucky to earn more than 2% interest on a financial deposit. Studies of various crops have shown a return on investment of up to 20% per year. No wonder The Economist described genebanks as “a vital safeguard against hunger”.

Putting Diversity to Good Use

Genebanks are vital to the future of people on Earth, and in a sense they are much more valuable than ordinary banks.

Perhaps the most important use of the diversity in genebanks is to prepare crops to cope with climate emergencies. Future food security depends on more resilient varieties that deliver better nutrition and protect the environment.

Plant breeders can draw on genebanks in their search for particular traits that they need. Farmers too can try many different varieties to find those that will thrive under their conditions. All this depends on information.

Genebanks describe and assess their holdings to gather data on each sample’s good and bad points. They know where it was collected, and the climate there. They need to make all this information freely available so that farmers, breeders and all other interested parties can find the genetic diversity that will help them improve the global food system.

What Role Does The Crop Trust Play?

Genebanks by the Numbers