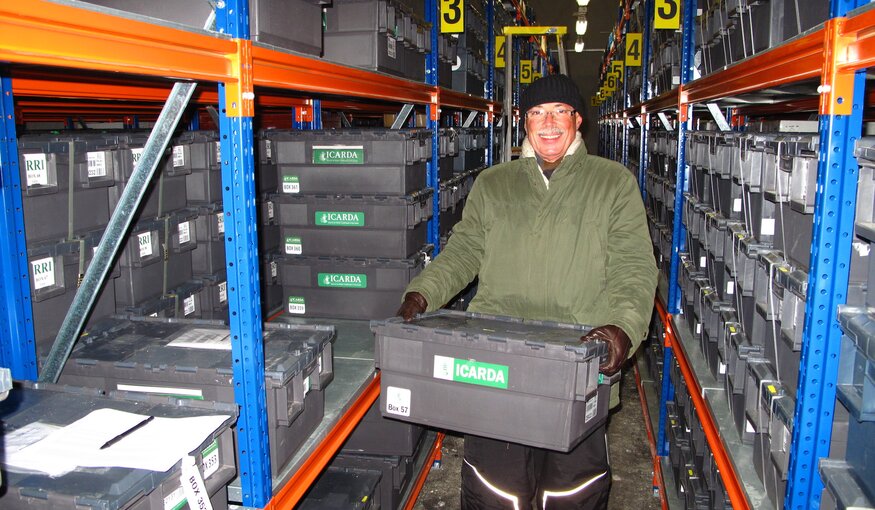 SVALBARD, NORWAY (13 September 2017) – Last week, the International Center for Agricultural Research in the Dry Areas (ICARDA) deposited more than 7,500 seed samples for safekeeping in the Svalbard Global Seed Vault. At the same time, the Center retrieved 52,451 samples, which were initially sent to Svalbard from its genebank in Aleppo, Syria – marking the second and largest withdrawal from the Seed Vault to date.

The preparation and shipment of seeds to and from the facility has been funded by the Crop Trust, the only organization working worldwide to create, fund and manage an efficient and effective global system of crop diversity conservation.

The Svalbard Global Seed Vault, the world’s largest collection of agricultural biodiversity, is a safe and secure vault, which can store up to four and a half million samples of crops from all over the world. By preserving duplicate samples of seeds held in genebanks worldwide, the vault provides an insurance policy against loss of crop diversity caused by climate change, natural disaster or war.

Crop Trust Executive Director, Marie Haga, commented, “ICARDA’s second withdrawal and their continued commitment to re-depositing these seeds back to the Seed Vault demonstrates the importance of the vault and the global system of conservation that underpins it in the present moment. At the same time, it shows that collective efforts to conserve this diversity for tomorrow continue to be strong.”

The seed shipment to Svalbard, which came from ICARDA’s 2016 seed harvest were made up of 7 boxes from Lebanon containing bread wheat, durum wheat and Faba bean and 20 boxes from Morocco containing chickpea, bread wheat and primitive wheat

This deposit follows an earlier deposit from ICARDA of over 15,000 seed samples in February 2017 and is part of ICARDA’s on-going efforts to protect its globally important collection of landraces and wild relatives – a crucial mission in light of the security situation in Aleppo where the Center’s main genebank remains active yet inaccessible.

“This is another memorable day for ICARDA,” said Dr. Ali Shehaded, Rangeland and Pasture germplasm Curator at ICARDA, speaking from Svalbard. “We are so happy that we were foresighted enough to secure our valuable seed collection in Svalbard, and that we are able to get viable seeds of good quality back now.”

The boxes, which are now en route, will be sent to ICARDA’s stations in Morocco and Lebanon. 68 boxes of faba bean, wild barley, pea, vetch, forage and range species and cultivated and wild chickpea are headed to Lebanon for regeneration, and 95 boxes are on their way to Morocco containing bread wheat, durum wheat, barley, chickpea and lentils.

“The deposit, withdrawal, and transport of the seeds may require a lot of resources and hard work,” Ali continued. “However, compared to the value of these seeds for future food supplies and global food security, the costs are small.”

From 2008 to 2014, ICARDA deposited 116,484 duplicate seed samples to the Seed Vault. Now, together with the samples returned in 2015 and with the withdrawal last week, ICARDA has about 78% of its initial seed collection in Svalbard back.

The funding of these shipments to and from Svalbard (in both 2015 and 2017) has been made possible by the Crop Trust. Total contributions to date are over 75,000 USD.

Beyond support for the Seed Vault and for seed shipments, the Crop Trust provides crucial funding and training for routine genebank operations, such as quality and information management. Without this basic support for diverse varieties of food crops - like the ones that travel to Svalbard - the future of the world’s global food supply is at risk.

ICARDA’s trust in the Svalbard Global Seed Vault, as evidenced by their two withdrawals and 9 different seed deposits to date, showcases to the world that the system the Crop Trust and its partners are developing to safeguard crop diversity actually works.

“Our withdrawal of seeds in 2015 proved that the seeds in the Vault kept viable perfectly,” concludes Ali. “I would really urge all genebanks to have copies of their unique seed accessions secured in the Seed Vault.”

General images from the Svalbard Global Seed Vault can be found here: https://drive.google.com/open?id=0BxopoAc8t8-oamk1ZlJMQkc5ZUE

About the Svalbard Global Seed Vault:

The Svalbard Global Seed Vault is the largest collection of agricultural biodiversity in the world and a key pillar in a global system of ex situ conservation. Located in Longyearbyen, Svalbard, the Seed Vault is owned by the Norwegian Government and operated under a three-party agreement between the Crop Trust, the Norwegian Government and NordGen. Depositors to the Seed Vault still own the samples that they deposit and only they can retrieve the material if required.

About the Crop Trust:

The International Center for Agricultural Research in the Dry Areas (ICARDA) is the global agricultural research organization working with countries in the world’s dry and marginal areas to deliver sustainable systems solutions that increase productivity, improve rural nutrition, and strengthen national food security. ICARDA is a member of the CGIAR Consortium