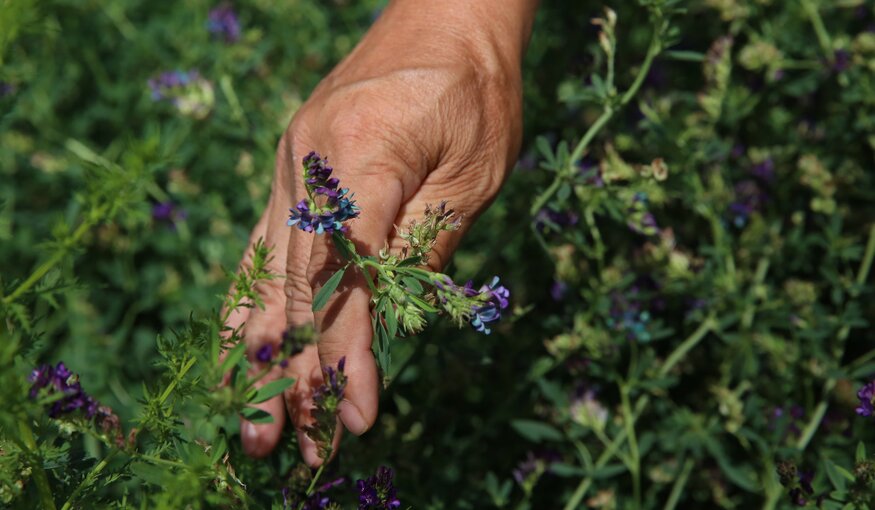 The Crop Wild Relatives Alfalfa Pre-breeding Project at the National Academy of Sciences of the Republic of Kazakhstan (KSRIAPG). (Photo: Luis Salazar/Crop Trust)

Zhongcao No. 3. When you first hear that name, you can be forgiven for thinking it’s an expensive perfume. But actually, it’s a Chinese variety of alfalfa.

It stands out for more than just its unusual moniker. This variety has wild cousins in its immediate ancestry that make it more tolerant to extreme cold and drought. It’s the kind of crop that plant breeders like me dream about.

I saw Zhongcao No. 3 for myself when I traveled to Inner Mongolia and caught up with the old friend that brought this exciting alfalfa variety to life.

I started collaborating with Professor Linqing Yu from the Grasslands Research Institute, Chinese Academy of Agricultural Sciences (GRI CAAS), back in 1998. Yu, or “the professor,” as I always call him, has been breeding alfalfa for more than 30 years. He’s developed a number of impressive varieties, including Zhongcao No. 3.

I hadn’t worked with him for a while, but the Crop Wild Relatives (CWR) Project brought us back together. The Crop Trust-led initiative funded a pre-breeding program that used crop wild relatives to adapt domesticated alfalfa to harsher climates, and this work is continuing under the new Biodiversity for Opportunities, Livelihoods and Development (BOLD) Project, with a focus on Kazakhstan and Pakistan. Alfalfa gets around.

In late 2019, I caught up with Prof. Yu in Inner Mongolia. I wanted to better understand the progress he’s made in developing and testing crosses between wild and domesticated alfalfa plants that can withstand the region’s long, cold winters. Over the last few years, he has managed long-term crop wild relative field trials and developed a new seed-sharing scheme.

“Through Prof. Yu’s scheme, more Inner Mongolian farmers will have access to a new and improved, climate-proof alfalfa variety: Zhongcao No.3”

Winter temperatures in Siziwang, a remote region along China’s border with Mongolia, regularly fall below −30 degrees C. To make matters worse, the snow layer is usually thin and inconsistent, so it does little to insulate the soil from these blistering temperatures.

Alfalfa plants, some of the region’s most important forages, somehow get through these conditions. This makes Inner Mongolia the perfect place for crop breeders like myself and the professor to screen for cold tolerance in our wild relative-derived alfalfa lines.

Despite surviving fairly well over the previous four years, in spring 2019 the plants in our CWR Project trials endured an even harder test. A late cold spell came not once but twice, a week apart in mid-May. The alfalfa plants, weak and with low energy reserves after the winter season, had their new shoots (re)frozen. The effect was devastating.

“This extended winter killed three-quarters of the plants in the field. Only two of the 30 trial lines had high rates of survival,” the professor said. “But this is not a failure. The selection pressure is good; the next generation, the progeny of the crop wild relatives-derived lines that survived, will be much better in the next trial.”

But the professor wants those progenies to go beyond Siziwang and into the hands of farmers all over the world. To do that, he’s going to need a lot more seeds.

The professor is always quick to point out that local farmers contribute directly to his breeding work. He collaborates with a network of smallholder farmers at key sites across Inner Mongolia. They help multiply seeds, taking them from a few grams of each promising variety up to hundreds of kilograms. This network includes his large nursery near Hohhot, the capital of Inner Mongolia, where the GRI is headquartered. There, several hectares are being used to produce seed for larger-scale evaluations.

The professor is not new to this complicated process. But in his many years in the field, he’s seen plenty of change.

“The main difference now is that farmers are encouraged to keep, use and sell seeds as part of this new seed-sharing scheme. This was made possible thanks to funding from the CWR Project.”

Mr. Wanyuan Wang is one of those farmers. As part of the professor’s farmer-assisted breeding program, he manages small plots (20–250 m2) of alfalfa scattered around the district that are intended purely for seed production.

“He has done a very good job,” the professor said. “His yields here are better than at my nursery in Hohhot.”

For his labor, Mr. Wang is compensated not only financially. He takes home plenty of alfalfa to feed his own flock of sheep and keeps some of the seeds to sell at regional markets. This is the model that the professor is employing across his evaluation sites, where farmers reap as much benefit as possible from their work with the GRI.

“It’s a win–win collaboration,” the professor said. “The farmer benefits and our agency achieves successful adoption of our varieties for the first time, ensuring that new varieties such as Zhongcao No. 3 are adapted to the lands where farmers grow, or could grow, alfalfa.”

It’s been 15 years since alfalfa seed was available at regional markets in Siziwang. At that time, the seed was made available through a government program, but those varieties proved poorly adapted to local conditions.

“They just did not survive the winter,” the professor said. “But things are changing for the better.”

“In a marginal, extreme production environment like this one, alfalfa is the cog that keeps the whole food system alive.”

In Prof. Yu’s trials, Zhongcao No. 3 has survived five winters so far, including the most recent one, which is said to be a one-in-10-year event. News of Zhongcao No. 3’s excellent performance is spreading. “Every day I get phone calls from farmers across Inner Mongolia requesting seed,” the professor told me. “So far this year, I have given away 1,000 kg of seed to about 500 farmers, and about 50 of them will produce seed to sell at regional markets.”

The seed-sharing scheme supported by the CWR Project expanded further in 2020, with more than 1,500 farmers growing Zhoncao No. 3 to feed their sheep – the first successful commercialization of a crop wild relatives-derived alfalfa in the region. The variety has now been recognized by the China Forage Industry System as the best-adapted variety for Inner Mongolia.

Selling seed will put Zhongcao No. 3 into the hands of more and more farmers. The long-term benefits of its spread could be considerable, as a resilient alfalfa emerges in more and more plots across Inner Mongolia. Alfalfa is high-yielding, long-lived and highly nutritious. When well adapted, it can live for more than 20 years. As a legume, alfalfa delivers a high-protein diet to livestock, critical in an environment where nitrogen supplementation is rare.

“Thanks to the CWR Project, we are not only developing new varieties, but also doing our best to make sure they reach those who most need it.”

Be it in China, Chile, Kazakhstan or Australia, farmers face their own, very particular set of challenges. In Inner Mongolia, the traditional models of distribution – where in the past the professor produced all the seed to sell – severely limited the adoption of new varieties.

“There simply was never enough seed available,” he told me. “But today, with farmers participating in the multiplication of seed, we hope that within a few years, Zhongcao No. 3 will be available for purchase all over Inner Mongolia, for some 1.1 million smallholder and subsistence farmers.”

My time in Inner Mongolia was brief. It always is. But these visits allow me to appreciate and admire the rapid progress in plant breeding and adoption being made in China. Demand for smarter, more resilient varieties is increasing, more quickly than I could have ever hoped for.

“I am honored to be a part of Prof. Yu’s program. A true breeding visionary, he has begun to radically change agriculture in Inner Mongolia and has overcome lifelong hurdles to seeing varieties like Zhongcao No. 3 widely adopted.”

Before the seed-sharing scheme was put in place, I had my doubts about its potential, as well as its name. Which, by the way, translated from Mandarin, means “Grasslands Research Institute No. 3”. Now, it isn’t hard to imagine that within the next couple of years the seed sharing will show just how much a variety of alfalfa that loves the cold can impact livelihoods on the endless plains of Inner Mongolia.

This multi-country project to breed drought-tolerant alfalfa is one of 19 pre-breeding efforts (100+ partners in 45 countries) that were part of the Crop Wild Relatives Project (2011 - 2021), funded by the Norwegian Government, and coordinated by the Crop Trust. The work is continuing under the BOLD Project, which is also funded by the Norwegian Government.

All agronomic and genetic data generated throughout this project have been shared on the online platform Germinate, a database platform that provides a standard and common interface to genetic resources collections.

Seeds of the improved crop wild relatives-derived alfalfa developed during this project are stored at the Australian Pastures Genebank, Australia, and shared under the terms and conditions of the Standard Material Transfer Agreement (SMTA) within the framework of the multilateral system of the International Treaty for Plant Genetic Resources for Food and Agriculture.

The Crop Wild Relatives Project was developed to collect important species of crop wild relatives, ensure their long-term conservation and facilitate their use in breeding new, improved crops. This 11-year project was launched in 2011 with USD 50 million in funding from the Government of Norway. Managed by the Crop Trust with the Royal Botanic Gardens, Kew, the project was implemented in partnership with national and international genebanks and plant breeding programs around the world. The work is continuing under the “Biodiversity for Opportunities, Livelihoods and Development” (BOLD) Project, which is also funded by the Government of Norway.