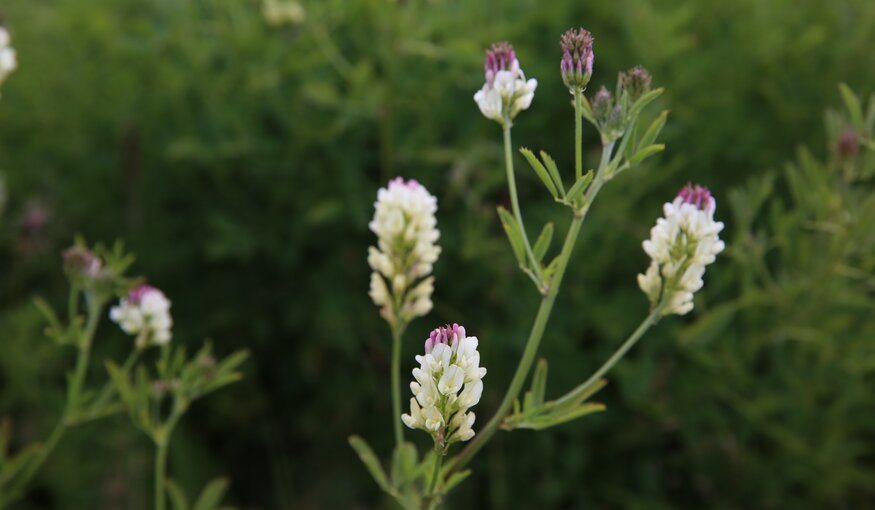 As part of the Crop Wild Relatives alfalfa pre-breeding project, an “alfalfa varietal garden” has been established at INIA’s Research Center Kampenaike, where 33 lines that include materials from China, Kazakhstan, and Australia are growing. (Photo: Luis Salazar/Crop Trust)

The bimonthly flagship publication of the Crop Science Society of America selected the two studies for its “2022 Outstanding Papers in Plant Genetic Resources” award based on scientific merit, innovation, and discovery of novel or new approaches in the field.

Both papers, which separately focused on the pre-breeding of sorghum and alfalfa using their wild relatives, were part of a series that included 19 contributions for the Crop Science edition titled “Adapting agriculture to climate change: A walk on the wild side.”

“The recognition for these two articles is testament to the painstaking work of all scientists involved in discovering new ways to use crop wild relatives in pre-breeding programs for the benefit of tomorrow’s food systems,” says Benjamin Kilian, who led the CWR Project. “Their dedication to crop diversity will continue to play a critical role in adapting our agriculture to climate change in the years ahead.”

The CWR Project, which ran from 2011 to 2021 with support from the Government of Norway, was a pioneering global initiative that aimed to harness the potential of the wild cousins of our domesticated crops for the development of new varieties resilient to climate change.

The Biodiversity for Opportunities, Livelihoods and Development (BOLD) Project, which the Crop Trust launched last year, again with the support of Norway, is a 10-year follow-up initiative to strengthen food and nutrition security worldwide by promoting the conservation and use of crop diversity in genebanks.

Both of the Crop Science award-winning papers involved scientists in Australia and elsewhere working on improvements to crops through the diversity found in their wild relatives.

One study described the development of a global resource for exploring and exploiting genetic variation in sorghum crop wild relatives. The five contributors at the Hermitage Research Facility in Warwick, Queensland, took advantage of recent advances in gene sequencing and mapping, which have made it easier to detect useful traits from crop wild relatives. New selection techniques have also made it possible to breed these traits into new crop varieties faster.

“I am delighted that the work of our team in Queensland has been recognized by the Crop Science Society of America,” says Emma Mace, the study’s lead author. “This was a very exciting project where we got to search for genetic needles in multiple haystacks, and to identify novel genes from crop wild relatives for use in breeding new and improved sorghum varieties.”

The scientists used the technical advances to develop new sorghum populations using crop wild relatives and local varieties collected from a range of environments across Africa.

Their work produced one of the largest resources of its kind ever developed for sorghum, a staple for more than 500 million people worldwide, predominantly in the tropics and subtropics.

“It’s so satisfying to have produced this global resource and delivered a significant increase in the genetic diversity available to sorghum breeders worldwide,” says Alan Cruickshank, one of the paper’s authors, and the leader of the sorghum pre-breeding project.

“We hope this award will help highlight the scientific excellence and broader benefits of the CWR Project as reflected in the Crop Science special issue.”

Data about the crop wild relatives collected are available through the Genesys platform, while data from the pre-breeding and evaluation projects are available through Germinate databases and other publicly accessible platforms. This makes the material much more useful to plant breeders, who can identify seeds with the characteristics they are looking for to breed improved varieties. They can then request samples of these materials.

The other prize-winning paper described a research project that harnessed drought-resistant traits in wild alfalfa plants from four continents to improve cultivated varieties. This perennial legume— which is also called lucerne—is one of the world's most valuable fodder crops, planted for hay and pasture in more than 80 countries.

The 21 contributors identified high levels of diversity in wild species of alfalfa that had adapted to extremely unfavorable environments with low rainfall, high temperatures, shallow soils, and winter freezing—from the searing heat of Australia to the bitter cold of Inner Mongolia in China, as well as the diverse climes of Chile and Kazakhstan.

The newly collected wild relatives and selected plants derived from crossing them with domesticated alfalfa are now freely available for use in alfalfa improvement programs, upon request from the Australian Pastures Genebank, under the conditions of the Plant Treaty.

“This award is a welcome recognition for the diligent efforts of the many crop scientists around the world who collaborated on this study,” says Alan Humphries, the principal research scientist at the South Australian Research and Development Institute (SARDI) and the paper’s lead author.

“We hope our work will encourage more breeding programs to tap the enormous potential of crop wild relatives for the cultivation of alfalfa in drought-prone regions and in other extreme environments.”