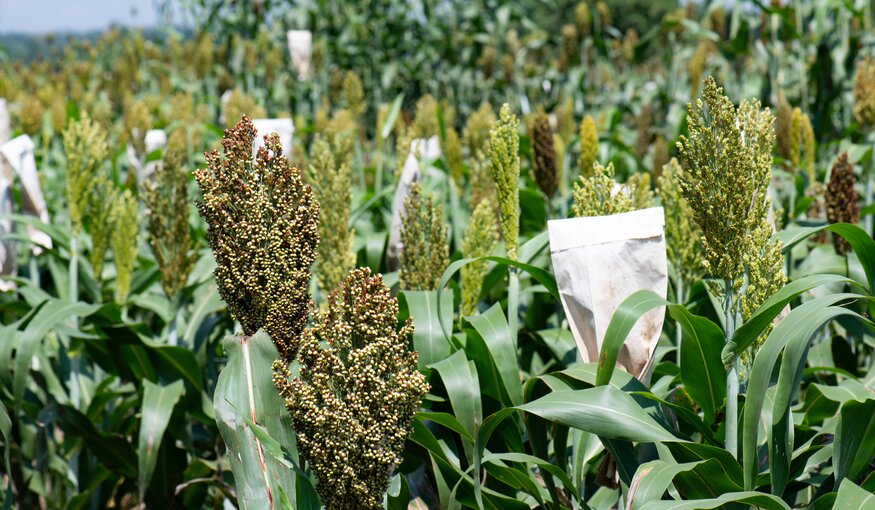 Wild relatives of the arid-zone grain sorghum have shown great promise in increasing the crop’s resistance to environmental stresses, for example, but translating promise into progress requires years of hard work and considerable investment.

So it’s welcome news that researchers and plant breeders developing new varieties of sorghum will now get a much-needed leg up in the form of a publicly available “toolkit” of previously undescribed genes and traits, as recently reported in a special issue of the journal Crop Science.

The work was conducted as part of the Crop Wild Relatives (CWR) Project, a global initiative to adapt agriculture to climate change.

Sorghum is a staple crop for more than 500 million people worldwide, predominantly grown in water-limited agricultural systems. However, recent modeling suggests that climate change will increase the incidence of various environmental stresses, with the potential to destabilize sorghum production. Unfortunately, modern varieties of the crop are not necessarily well equipped for this future.

“When humans began selecting sorghum plants that had characteristics useful for farming, they also inadvertently caused a reduction in genetic diversity,” says David Jordan, who leads the CWR Project’s sorghum pre-breeding program in Australia and was one of the study authors. "With climate change already taking its toll on the productivity of existing varieties, we have to go back and search among the related wild species for valuable genes that could help the crop withstand future conditions," adds Jordan.

The hunt for climate-resilient traits has not been easy. Searching for valuable genetic traits from crop wild relatives is a bit like refining ore to extract gold, according to Jordan.

Crop wild relatives offer a rich source of gene variants to test for usefulness in conferring such traits, but it remains difficult to screen samples quickly, accurately and cheaply. The cost of identifying and using such genetic variation has been too high for most breeding programs.

However, the research group in Australia took advantage of recent advances in gene sequencing and mapping, which have made it easier to detect useful traits from CWR. New selection techniques have also made it possible to breed these traits into new crop varieties faster.

For example, one of the populations’ donor plants is thought to have first been domesticated in West Africa amid poor soil conditions and unreliable rainfall. Another of the donors was probably cultivated by farmers in East Africa, possibly in Ethiopia or Sudan. The different traits of each donor offer potential adaptability to the various challenges of climate change.

So, what does all this mean for the sorghum of the future?

Having access to this new, expansive set of genes and traits from different environments will accelerate and improve the process to breed new, resilient sorghum varieties adapted to a range of localities and conditions.

“This unmatched resource has the potential to deliver significant outcomes for future research as well as the actual breeding of new, better varieties,” says Jordan.

“Making this whole range of genes, including those from wild relatives, available to researchers and breeders is a huge accomplishment,” says Benjamin Kilian, who manages the CWR Project. “This will ultimately lead to crops that can better stand the pressures caused by climate change, improving food security in many regions across the world.”

The new sorghum crop wild relatives-derived population is maintained at the Australian Grains Genebank and is available under the Standard Material Transfer Agreement of the Plant Treaty.

This is the final blog post in this series covering research published in the recent special issue of the journal Crop Science on developing new crop varieties using wild relatives.