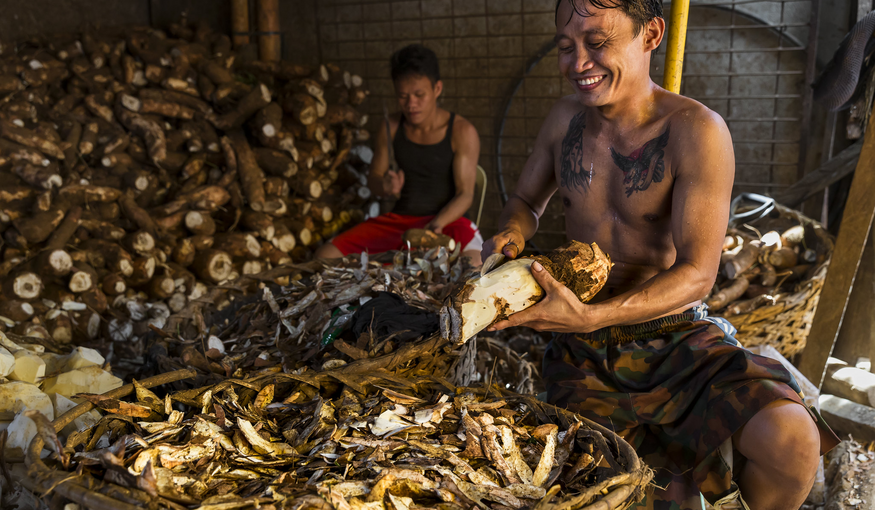 In a market in Davao, traders peel exceptionally large cassava roots by hand. In its roots, cassava is capable of producing a greater yield of carbohydrates per hectare than any grain crop. It may have a short history in Southeast Asia, as crops go, but cassava’s presence in the future seems assured as a climate-tough crop to support food security and livelihoods. (Photo: Brent Stirton /Reportage by Getty Images for Crop Trust)

Summers are getting hotter year on year. Parts of Europe and North America experienced record-breaking high temperatures in June and July 2022 with the U.K. even experiencing its hottest day ever.

While many of us can modify our environment with fans and air conditioners to make the heat a bit more bearable, the crops and livestock that provide our food don’t have that luxury – when the weather gets hotter, they just have to deal with it.

All plants and animals have their ideal temperature ranges. Too much heat upsets them. Often, a plant’s growth and reproduction cycles are compromised, resulting in reduced quality and quantity of yield or total crop failure. Livestock have the same problem.

Agriculture will have to adapt – particularly through drawing on a greater range of plant and animal diversity – or face the consequences. But adaptation doesn’t happen overnight. It takes years. Meanwhile, extreme weather events like these heatwaves are expected to become more frequent and intense. Business as usual is simply not good enough.

Fortunately, scientists – including many at Crop Trust and its partners – are already busy trying to identify and better understand the crops and livestock that can naturally beat the heat. While we humans seek shelter, some plants and animals stand out as durable and resilient in a world with rising temperatures.

Check out three foods that can beat the heat this summer.

Known by many names, cassava (or manioc or mandioca or yuca) is a staple crop across tropical areas. People who live outside the tropics are perhaps more familiar with its popular product – tapioca pudding. Cassava can also be used as a flour, sweetener and even as a laundry starch. All of these products are made from the crop’s hardy roots.

Cassava can thrive despite poor soil conditions, drought and high heat. Some cassava varieties can withstand temperatures up to 38°C. Even when temperatures fall outside of cassava’s ideal temperature range it will show only minimal decreases in yield. That tolerance to heat explains why nearly half a billion people depend on cassava for a large part of their calory intake.

Like cassava, pearl millet is known for its versatility and durability. In West Africa and Asia, in particular, the grains are consumed in all sorts of foods. It can be found prepared like rice, in porridge or even in beer. Pearl millet can replace wheat or rice in certain dishes, and the leaves and stems provide fodder for livestock too.

Of all the major cereal crops, pearl millet is most tolerant of extreme temperatures and drought. It can still produce a reliable harvest if there are heat waves up to 42°C. Because of that tolerance, it can take the place of crops like wheat, rice and maize in hotter, drier climates. In the Sahel region of Africa, for example, farmers often grow pearl millet instead of sorghum during the hottest summer months.

Because pearl millet is such a promising crop for a changing climate, a global team of 65 scientists from 30 research institutions worked to decode and sequence the pearl millet genome. Identifying markers for heat tolerance and other climate-resilient traits will enhance breeding efforts for this crop and other dryland cereals that could impact food security for millions of people in arid and semi-arid regions.

Animals can beat the heat too!

Goats are particularly adept at adjusting to survive in a range of adverse climates and are less susceptible to heat stress than other livestock such as pigs, sheep and cattle. Local breeds are well adapted to their specific environments and are particularly valuable in dry areas, where they can be reared on marginal land and still produce high-quality milk and meat.

Local breeds, however, are typically owned by small-scale farmers or nomadic pastoralists, which makes it difficult to determine the number of animals of any one breed or to identify their unique traits. The International Livestock Research Institute (ILRI) and other institutions are working to measure existing goat diversity and assist with breeding efforts to build up resilient livestock populations and prevent genetic erosion.

Maintain Our Food Supply Despite the Heat

It is vital that we continue to incorporate these resilient crops and livestock into breeding programs and ensure their availability to farmers and other agriculturalists worldwide.

Thankfully, these aren’t the only treasures hiding amidst the vast spectrum of biodiversity in our food systems. The diversity of our crops and livestock is immense.

Our food systems have had to adapt to changing environments over millennia – but today’s changing climate is putting new stresses on old varieties.

Adequate food and nutrition is crucial, and we are already witnessing the cost of inaction. The time to collect, conserve and make use of the biodiversity that hasn’t already succumbed to the unprecedented levels of human and environmental stresses is now.

Each one of us can take action to incorporate more diverse crops and livestock into our food systems so that what we eat stands a better chance of beating the heat.