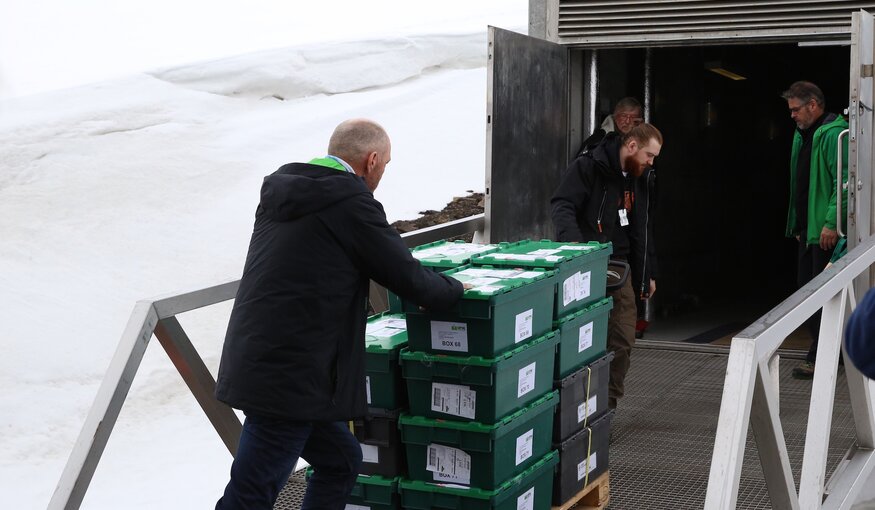 BONN, GERMANY - 23, May 2016 - Institutes from around the world made deposits to the Svalbard Global Seed Vault this week, marking another step forward in the fight to ensure future global food security. More than 8,000 varieties of crops from Germany, Thailand, New Zealand, and the World Vegetable Center arrived at the Vault, located on a remote Norwegian archipelago, to be stored deep within the permafrost.

The Vault is located within the Arctic Circle, and helps to protect the biodiversity of some of the world’s most important crops against climate change, war and natural disaster.

The ryegrass and white clover seeds that have arrived at the Vault from New Zealand make up much of the feedstock for the country’s 60 million sheep, and the crops they produce have been worth an estimated NZD 20 billion to the nation’s national economy over the last 50 years. New Zealand recently pledged NZD 2 million to the Crop Trust Endowment Fund.

The deposit from Thailand has been inspired by its royal family, after Princess Maha Chakri Sirindhorn visited the Arctic and was encouraged to make the first ever deposit from her homeland. Included in this deposit is the Grand Father Sumet Chili Pepper, which was named by the Princess in honour of the Secretary-General of a Thai genebank, who recently became a grandfather.

Depositing these seeds in Svalbard safeguards a rich reservoir of genetic diversity. Crop diversity is essential for the health of global agriculture and food production, which is threatened by ever changing environmental and geopolitical and socioeconomic conditions. Preserving duplicates of these seeds means that depositing genebanks can be restocked should this ever be required, and ensures that scientists and agriculturalists have access to the varieties they need to grow more resilient and productive crops.

ast year saw the first ever withdrawal from the Vault, as duplicates of seeds which had been preserved in Aleppo, Syria by the International Center for Agricultural Research in the Dry Areas, were sent to Morocco and Lebanon from Svalbard, after the Syrian civil war had made the Aleppo bank unviable.

The Crop Trust, an international organisation devoted solely to ensuring the conservation and availability of crop diversity, funds the annual operating costs of the Seed Vault with its partners, the Norwegian Ministry of Agriculture and NordGen.

New Zealand is prone to earthquakes, so I made this seed deposit my mission and one of the priorities after I noticed there was no backup for our national collections.

The Crop Trust is playing an important role for genebanks around the world. It supports the regeneration and safety backups of the world’s seed collections, especially in developing countries and for the international genebanks.

Natural disasters and war are thankfully not an everyday threat in Central Europe. But we can’t predict what the future holds, so it is essential to have a backup of our vital seed collections. Svalbard is one of the safest places imaginable.

We are delighted to accept more seeds from around the world at the Seed Vault for safekeeping. Today’s deposit is another important step towards ensuring that the global agricultural system is secure and diverse enough to meet the challenges of the 21st century.

Maintaining crop diversity, and the genetic wealth it provides to current and future generations, is beneficial not just to crop breeders, but to the farmers that feed all of us on the planet.