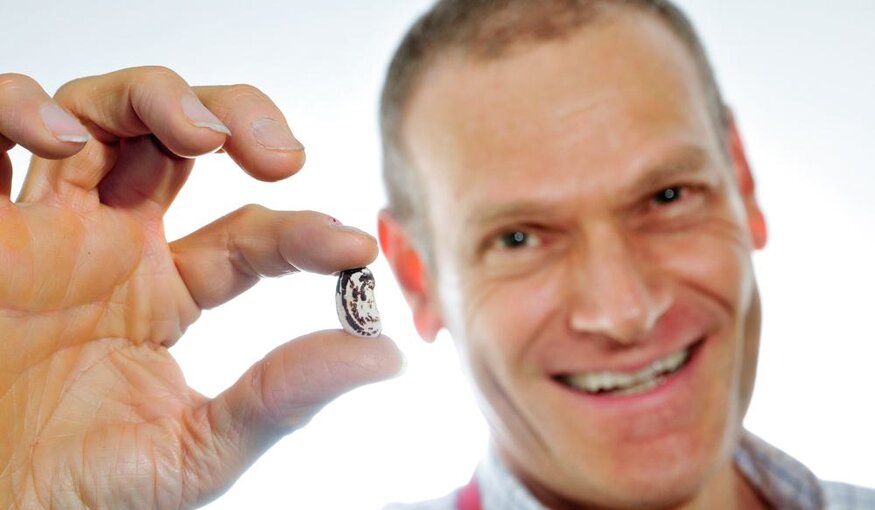 Daniel Debouck holding a bean in the CIAT genebank in 2010. (Photo: Neil Palmer/CIAT)

The world’s leading expert on the diversity of beans has collected 4,000 accessions in 38 expeditions through 11 countries and has discovered 16 new species.

Daniel Debouck began his career with a bit of a quandary. It was 1977 and he was fresh into a new job with the Plant Production and Protection Division of FAO. His assignment was to improve bean nutritional quality by crossing modern varieties with other bean species. But there was one problem: there were very few other species to cross with.

So Daniel tackled that quandary head-on. He packed his ever-present suitcase and traveled to Mexico – the heart of bean diversity – to collect beans.

Now, 40 years later, Daniel has collected more than 4,000 accessions in 38 expeditions through 11 countries. He has discovered 16 new species and identified the ancestors of two crops.

Daniel Debouck is, without a doubt, the world’s leading expert on bean diversity, and his contributions were recently recognized by the Crop Trust in a Legacy Award. Daniel served for almost 20 years as the head of the Genetic Resources Unit at the International Center for Tropical Agriculture (CIAT) in Colombia, one of 11 CGIAR genebanks under the Genebank Platform.

Getting to Know Beans

When Daniel reflects on that time first spent in Mexico collecting yet unnamed bean species, he describes the significance of two major realizations: “First, that the diversity of a tropical crop – even one as important as beans, a daily staple for millions of people – was not well known,” said Daniel. “Second, that diversity was being unrelentingly lost, to the benefit of no one.” It was through these realizations that Daniel recognized his calling to pursue a career that was not only enjoyable to him but also quite useful to other people!

In 1990, Daniel took a position as a research officer with the International Board for Plant Genetic Resources (IBPGR) in Italy, which then became the International Plant Genetic Resources Institute (IPGRI) in 1991. Two years later he moved to Colombia to work as Senior Scientist for IPGRI’s regional office in the Americas. During these early years of his career, Daniel worked tirelessly to collect genetic diversity and ensure its safekeeping both physically and legally. Daniel can tell a story about nearly all of the 4,000 bean accessions he has collected. For example, in 1979, he discovered a tepary bean in the Mayan county of Campeche. It has now been crossed with modern beans to create what has become known as the ‘heat-beater’ bean, which can withstand higher temperatures.

Then there’s the story of the group of popping beans he rescued from the brink of extinction in the Andes. These were used during an era of early food processing by humans in the Andes and have tremendous potential to lower energy costs in food preparation as well as to reduce childhood obesity.

Then in 1996 Daniel became the head of CIAT’s Genetic Resources Unit. His diverse work experiences were great preparation for managing a genebank. “I understood how genebanks integrated within an international conservation agenda, but I also understood their limitations,” said Daniel. “I knew how to build the teams needed for completing relatively complex tasks because I had performed many of these same tasks (or similar ones) myself.”

At CIAT, Daniel was in charge of a sizeable collection of germplasm – including the world’s largest collection of beans. “I was responsible for 68,000 accessions that represent the heritage of 141 countries,” Daniel said. “Managing collections well takes care and curiosity, and a true appreciation that one is handling thousands of exceptions.” These are qualities that Daniel appears to have in spades.

Challenges and Changes in Genebanks

At CIAT, Daniel inherited three crop collections and a building constructed as a meat quality-testing lab. He turned this into a functioning genebank, but not surprisingly encountering many hurdles along the way. Daniel’s biggest challenge was bridging the chasm created between the general rhetoric on the importance of genetic resources and the day-to-day reality of obtaining funding and operating on a shoestring. “I guess this is a frustration experienced by colleagues as well, even by some of our donors, because, in general, people are short-term thinkers, once we have achieved something such as reducing hunger – we tend to forget the very basis that made this success possible,” Daniel said. “Genebanks are part of a societal insurance for food security and economic stability.”

“This frustration turns into something more urgent by calamities like the extinction of a unique variety or species. There is no possibility to reverse such a loss,” Daniel continued. “Many continue to think and act as if the world has limitless resources.”

Daniel doesn’t speak of extinction in broad sweeping strokes, as is often the case. He makes it personal, drawing a disturbing analogy: “When a species is lost, it is equivalent to the death of a colleague or collaborator. It means the end of all that it had to offer – the end to a source of infinite possibilities.”

When addressing the future of genebanks, Daniel speaks to the nitty gritty of day-to-day operations as well as the global context in which genebanks operate. Robotics are just around the corner and have the potential to lend a hand when it comes to viability testing and carrying out some of the more mundane tasks associated with the genebank. He sees this as a positive thing to allow staff to devote more time to the creative thinking that robots aren’t capable of.

Looking at the bigger picture, Daniel thinks that genebanks are going to evolve over the next 20 years. “They will be serving more actors in society and across borders.” Genebank managers now and into the future need to be multidisciplinary in their skill set, with a solid background in genetics, plant physiology, statistics, engineering, law, management of human resources… the list goes on. But Daniel fears that higher education, and indeed most employers today, favor early specialization, which doesn’t necessarily foster the diverse skills needed for finding sustainable and holistic solutions.

One way in which genebanks are moving forward is by developing ways to illustrate the richness of collections, ensuring that Daniel’s lifetime contribution in securing bean diversity in ex situ conservation becomes more visible. The Conservation Module of the Genebank Platform is working to develop methods for assessing the richness of collections and identifying gaps in terms of traits, geographical coverage and genetic diversity. Currently, a  “diversity tree” is being constructed for beans on the basis of expert knowledge, mostly Daniel’s, to explain the total diversity of the bean genepool in the form of a family tree. The next step will be to map the accessions held in bean collections around the world onto the tree and see in which branches few or no accessions exist in ex situ conservation.

The Crop Trust Legacy Award is just the latest in a series of accolades Daniel has received in his career. In 2010, he was awarded the Frank N. Meyer award for plant genetic resources, and the Order of Leopold, the highest recognition bestowed by the Kingdom of Belgium, was bestowed on him in recognition of his scientific achievements in 2017.

Daniel’s legacy will long be remembered in bean taxonomy; not least thanks to a bean being named after him. During a trip to Peru in 1985-86, Daniel collected in a region now known as the Amotape-Huancabamba Depression. Unexpectedly, he found wild beans there that baffled taxonomists for some time. “When colleagues in the USA, CIAT, Italy, and elsewhere analyzed these wild beans they didn’t look like anything else in the bean genepool,” Daniel said. “I was always convinced that these beans were unique and ancient. And this hypothesis has come through. The Peruvian beans are a relic of a population of Phaseolus vulgaris that became isolated when the speciation process happened about half a million years ago.” One of these beans was appropriately named Phaselous debouckii.

Despite having officially retired in 2016, Daniel has not yet found time to pack the suitcase he always carries (“How else is a Belgian going to carry his umbrella?”) with anything other than scientific papers and his data. He’s tying up loose ends in his usual meticulous style, ensuring that he leaves his house in order for his successor so to speak. He also has a few project ideas that he can finally make time for: “After having identified hundreds of specimens in 86 herbaria around the world, there are still six voucher specimens that I haven’t put a name to yet! How is that possible? I need to get back to these collecting locations and find these plants,” Daniel said with commitment.

Daniel’s humor comes through when he thinks about what his successors will say about him: “Perhaps this guy knew something about diversity in beans.” As the world’s leading expert in Phaseolus, and the only expert to have ever collected throughout the entire distribution of the wild species – from northern Mexico to norther Argentina, it is probably safe to assume that people will indeed say that Daniel knows his beans.