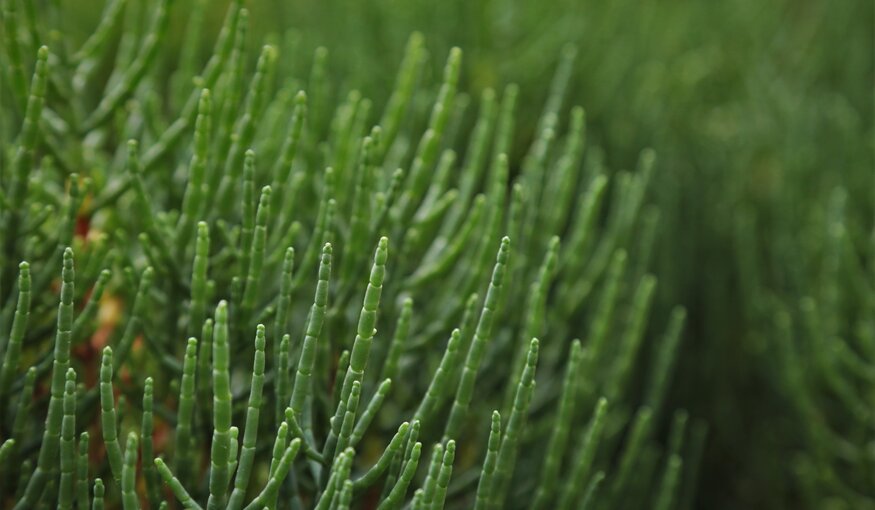 Salicornia bigelovii (Samphire) is classified as a halophyte or a plant which grows in salt water. The International Centre for Biosaline Agriculture (ICBA) in Dubai, United Arab Emirates, is researching the potential of halophytic plants for food security in areas facing soil salinization.

Come on, sir; here’s the place: stand still. How fearful

And dizzy ’tis, to cast one’s eyes so low!

The crows and choughs that wing the midway air

Show scarce so gross as beetles: half way down

Quinoa was once suppressed in its Andean home by the Spanish conquistadors, but its modern-day avatar as a superfood has driven its worldwide spread and a doubling in production over the last decade. Not every such on-trend exotic food has enjoyed such unfettered growth, however. The group of marsh succulents loosely termed samphire, and known variously as sea asparagus or sea beans in the US, boast a nutritional palette as impressive as the South American grain. But if it’s not unheard of to be treated to a few sprigs of this bright green, salty vegetable on a fillet of fish, it’s hardly common fare. Like Shakespeare, you couldn’t be faulted for thinking that samphire is only foraged by fools hanging off the sides of crumbly chalk cliffs.

Scientists at the International Centre for Biosaline Agriculture (ICBA) are working hard to change this perception. Through their pioneering work on halophytic (salt-loving) plants, including Salicornia bigelovii (samphire), it is hoped that these niche ingredients will soon become staples of a diet for a world in which freshwater irrigation is increasingly a luxury. For samphire not just tolerates drought conditions, it can grow in the kind of water that makes up over 97% of the global supply: seawater.

This is something of a superpower for a food crop and makes samphire an ideal subject for experiments carried out by ICBA, a non-profit agricultural research facility spread across 100 hectares in the hot, dry climate of the United Arab Emirates. Using reject brine from desalinization units, treated with fish effluent and fed into an aquaculture system, scientists are successfully growing and breeding crop varieties suited to degraded and marginal lands, directly addressing the concerns of farmers battling soil salinization and rising temperatures in the Middle East and farther afield.

The project “Inland and coastal modular farms for climate change adaptation in desert environments” is preparing the ground for multi-component, climate-resilient and affordable farms that will make the best use of the region’s limited agricultural resources. ICBA estimates that with its high oil content (30%), one hectare of S. bigelovii can produce up to 250 gallons of bio-diesel, following the extraction of which the meal can be used as high-protein animal feed. But scientists like Dr. Dionysia Angeliki Lyra, a halophyte agronomist at ICBA, would have you finish your greens and try some new ones. As she observes, samphire is “very rich in antioxidants, fatty acids, vitamins and other vital elements essential for human health.” Samphire is actually “better than asparagus”, she says, in terms of providing healthy fats, fiber and minerals such as calcium, magnesium and manganese that are crucial to heart, nerve and bone health.

It is also very easy to prepare – it can be eaten raw or steamed, then tossed with olive oil or butter for a crunchy snack or accompaniment to seafood. But ICBA isn’t leaving it at that. A team-up with famed Dubai chef Doxis Bekris has created a series of halophyte-based dishes to tickle the palates of foodies and inspire home cooking. Rock samphire (Crithmum maritimum) with tilapia and quinoa, samphire crackers and, yes, Salicornia jelly and juice – it’s a quest in uncharted, salty waters!

ICBA has applied a similarly holistic approach to all aspects of the Salicornia project in order to avoid the pitfalls of previous ventures in places such as Saudi Arabia and Eritrea. Past investments in samphire farming have failed due to factors such as political instability, insufficient funding and inadequate market strategies. The ICBA project seeks to engage all stakeholders from cultivation to marketing – from “desert to dinner,” if you will.

It’s a real challenge to create a value chain like that from scratch. But ICBA has so far demonstrated the kind of tenacity that halophytic plants are so valued for. The first phase of the project focused on setting up an integrated farm to develop these crops of the future. The second phase is the future: it aims to scale up production of Salicornia and other halophytic vegetables in selected UAE farms before marketing the products locally and then internationally. ICBA researchers believe that successes can be replicated in other regions with similar climates, just as is happening now with quinoa. And with samphire retailing at over US$20 a kilo in Western markets, whatever the Bard had to say, it may not be such a dreadful trade after all.

The Food Forever Initiative originally published this article, a campaign to contribute to the implementation of Target 2.5 of the United Nations Sustainable Development Goals to safeguard and share crop and livestock genetic diversity. The Food Forever Initiative united prominent actors to contribute to the implementation of SDG 2.5 and communicate the importance and urgency of crop and livestock diversity.