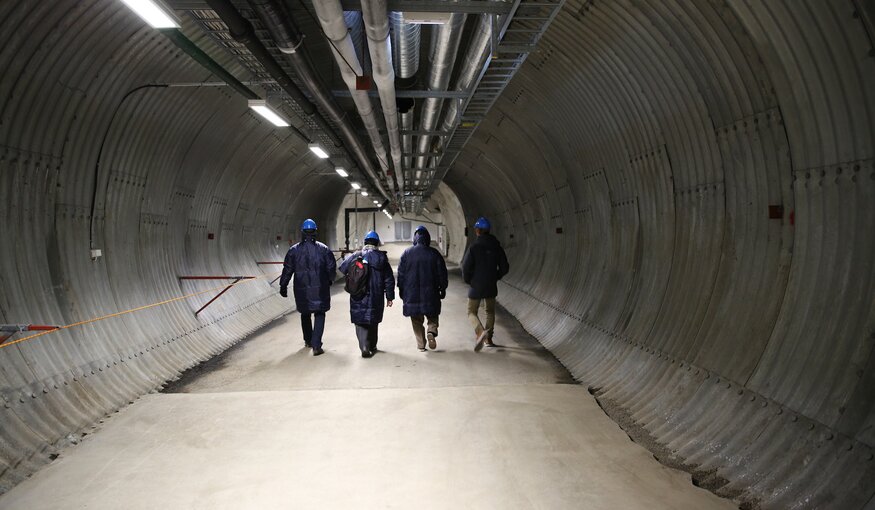 In April 2014, India made its first seed deposit to the Svalbard Global Seed Vault with one box of 25 accessions of pigeon pea. The official deposit took place on April 9, 2014. Representatives of NordGen and the Global Crop Diversity Trust (Crop Trust) welcomed Director K C Bansal, from the National Bureau of Plant Genetic Resources (NBPGR), who personally transported the safety-duplicates from New Delhi to Longyearbyen, in the Norwegian archipelago of Spitsbergen.

Director Bansal visited the Vault as part of an official Indian delegation invited by the Crop Trust, which also included Secretary Shri Ashish Bahuguna from the Department of Agriculture and Cooperation.

Marie Haga, Former Executive Director of the Crop Trust, was happy to see India come forth and participate in this worldwide conservation effort. “More so because the first contribution by the Indian government to this global collection is pigeon pea: one of the 25 crops of most importance for global food security,” she said.

Pigeon pea – scientific name: Cajanus cajan – is an important crop for small-scale farmers in semi-arid areas. It is drought resistant and can be grown in areas with less than 65 centimeters of annual rainfall.

With recognition of its role in food security, pigeon pea has gone from an “orphan crop” to a high priority research subject with a fully mapped genome. Scientists at the International Crop Research Institute of the Semi Arid Tropics (ICRISAT) have already used traits from one of the crop’s nearest relatives, which still grows wild in central India, to produce hybrids that boost yields by 48%. These efforts wouldn’t be possible if it weren’t for the seed collections conserved in genebanks.

“Conserving crop diversity today is providing future security to develop new varieties and to meet the food and nutritional requirement of the ever growing world population,” said Director Bansal. “Conservation of available crop diversity is the first step to manage and effectively utilize genetic resources for our present and future needs.”

Today, India produces about 75% of the world’s pigeon pea crop.

A multi-purpose crop, it functions as a "living fence" in the fields; its seedpods and leaves are used to feed livestock. Pigeon pea also provides "green manure" in many home gardens, and its dry stems are used both as fuel and construction material. But mostly it is the seeds that are used -- dried and split for cooking as toor dhal (polished or unpolished)..

“Pigeon pea is one of the most important pulse crops of Indian origin,” said Director Bansal. “It plays a significant role in the household economy of marginal farmers in drier areas of India. It is significant in the diets of the vegetarian population of India, being a high source of dietary protein.”

Pigeon pea also packs lots of vital amino acids and vitamins and is an important crop in poor households in eastern Africa, Central America and the Caribbean.

Pigeon peas taste ranges from bitter to sweet and color varies from black to creamy white. The crop exists both in annual and perennial forms. Faster-growing types produce a harvest in as little as three or four months, beating drought before it arrives.

National responsibility for ex situ conservation in India is vested in the Indian Council of Agricultural Research (ICAR), National Bureau of Plant Genetic Resources (NBPGR), New Delhi. According to Director Bansal, the decision to deposit seeds in the Svalbard Vault was taken after Marie Haga, Executive Director of the Crop Trust, visited the NBPGR in India last November 2013.

“The Global Crop Diversity Trust has the mission to conserve and make available the genetic diversity of important crops for food security worldwide,” said Director Bansal. “It is serving the noble cause of the future well-being of humanity.”

Approval from competent authority to deposit the pigeon pea seeds was sought to coincide with the visit of the Indian delegation to Svalbard Global Seed vault in April 2014, he explained and stressed the importance of crop diversity conservation:

"It is urgent to conserve now, as we are losing the diversity at a faster rate than ever before because of intensive agriculture, mono cropping and loss of habitat for landraces and wild relatives of crops,” said Director Bansal.

No country is self-sufficient in crop diversity.

“We all depend on seeds sourced from other countries and continents to develop improved crop varieties,” said Marie Haga. “New varieties need to produce higher-yields with less water, fertilizer and other inputs.”

Furthermore, unpredictable weather patterns such unusual rains and drought spells, soil erosion and change in land use pattern are posing new challenges that can be adequately addressed by rediscovering the power of seeds. That is why their conservation and availability is extremely important to helping agriculture face these and other challenges.

The Svalbard Global Seed Vault plays an important role in this conservation and is run by a three-party agreement between the Government of Norway, NordGen, and the Crop Trust. But it is NordGen who is responsible for the daily operation and management of the Svalbard Global Seed Vault. A Standard Depositors Agreement was signed by Director K C Bansal on behalf of NBPGR, and the director of NordGen on behalf of the Norwegian Ministry of Food and Agriculture.

This event marks the first Indian seed deposit sourced from NBPGR’s own collection. For the next shipment, NBPGR is preparing approximately 1,000 wheat varieties.

“These could be ready within three months for shipment to Svalbard, after sufficient drying in India,” assured Director Bansal.

For now, a total of 820,000 accessions are currently stored in the Svalbard Global Seed Vault – a mere fraction of its 4.5 million accessions capacity.