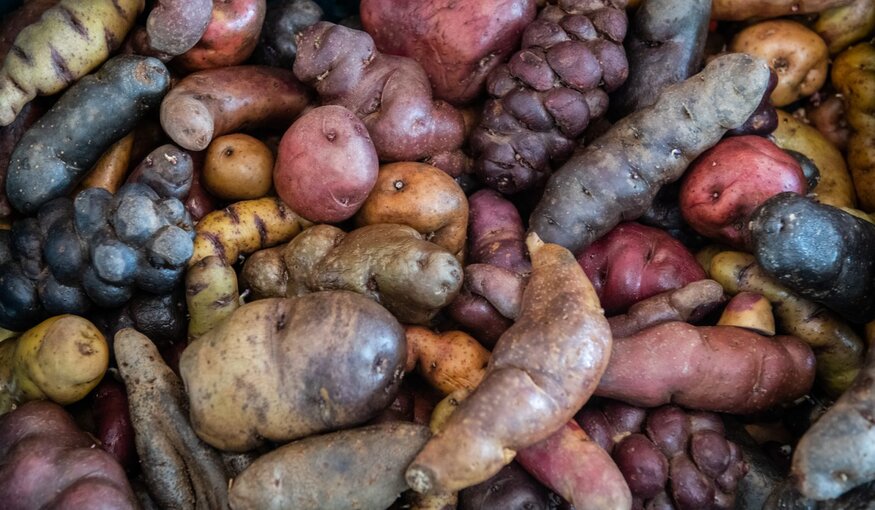 Climate change is reducing potato yields in some important production areas due to more drought, heat, and diseases like late blight and bacterial wilt.

Our partners from the International Potato Center (CIP) are working with the Crop Trust’s Crop Wild Relatives (CWR) Project to counter this by tapping into the genetic diversity available in the wild relatives of the potato.

I wanted to learn more about these potatoes derived from crop wild relatives so I traveled to the Andean highlands of Peru to hear directly from the scientists and farmers involved in developing spuds for a changing climate.

There are about 150 known species of wild potatoes which can be found from southwestern United States to southern Chile, with the highest diversity of species found in Peru and Bolivia. And, fortunately, many of those do indeed have that diversity breeders need.

Researchers at CIP are exploring the genetic diversity of the wild cousins of potatoes and they’ve been pretty impressed with what they’ve seen. I was keen to see for myself, so I set out on a four-day whirlwind tour in the highlands of central Peru.

After a long journey by air and road from Lima, my CIP travel mates and I arrived in the central Peruvian city of Oxapampa at an elevation of 1800 meters above sea level. Late blight, a micro-organism that can devastate potatoes, thrives here, and that makes it a perfect place to test for resistance.

Late blight was once a problem only at lower elevations, but now, as temperatures rise, it is thriving at higher elevations as well. And that’s a big problem for farmers. As soon as we got to the fields where CIP is conducting trials, I could see the devastation being caused. It was depressing to see row after row of dying potatoes.

But then I saw a plot of very healthy plants. “We took the late blight susceptible potatoes farmers are now growing and crossed them with their wild relatives,” said CIP’s Thiago Mendes, who is leading the pre-breeding project. “We’re thrilled to see that many of the resulting plants now have a natural resistance to the disease.”

Mariela Aponte (pictured here on the right), the project’s research assistant based in Peru, was beaming as she showed the trials to Thiago and me. “The natural resistance in these potatoes is looking very promising and means farmers will be able to reduce the amount of chemical sprays they apply to their fields,” she said.

I wanted to see where and how all of those new plants were developed, so we traveled to 3300 meters above sea level, which is where the Huancayo Experimental Station is located. CIP’s Flor Osorio (pictured here) led me into a greenhouse where she and her team had made hundreds of crosses.

“Here we take advanced potatoes that have heat tolerance and cross them with potatoes that have been derived from crop wild relatives that have bacterial wilt resistance,” Flor explained. The resulting plants will then be evaluated and hopefully lead to a new variety which farmers can plant to cope with the changing climate.

I watched attentively as Flor demonstrated the crossing procedure, which she and her colleagues had repeated countless times in that greenhouse. She isolated one flower which had its stamen (the male part) removed to prevent self-fertilization, and then dipped its stigma (the female part) into pollen obtained from the stamen of a different plant. It was fiddly work.

She then used a bar code scanner to enter key data about that cross into a database, along with information on thousands of others.

In the next greenhouse, I met Kristel Hotuya. She is a Masters student at the Universidad Nacional Agraria La Molina (Peru) and showed me how she is simulating dry conditions to determine how tolerant the potato wild relatives are to drought.

Kristel’s work on drought extended into another greenhouse, where I was amazed at the diversity of potato crop wild relatives. CIP staff, like Alberto Salas, have been collecting these wild potatoes for decades and conserving them in genebanks.

We rose early the next day to get another taste of potato diversity: the central market of Huancayo, a busy center of potato commerce in the central highlands of Peru.

Vendors sell both landraces (“papas nativas”) like Amarilla (meaning yellow) as well as the most widely grown commercial variety, Yungay.

I was overwhelmed by the dozens of varieties of potatoes being sold, but Thiago reminded me that I was only seeing a small fraction of the estimated 4,000 types of “native” potatoes cultivated in the Andean highlands.

At the market we met Raúl Ccanto, an agronomist with Grupo Yanapai, who is working with the pre-breeding project. Grupo Yanapai is a non-profit organization which serves as a bridge between breeders and farming communities in the Central Highlands of Peru. Raul didn’t let us linger in the market for long since we had a group of farmers waiting for us.

Climate change is forcing farmers to plant at cooler temperatures higher up in the mountains, so we drove to 3800 meters above sea level. After hiking in the high altitude, we arrived breathless at a small field of potatoes, where a group of farmers greeted us warmly.

Raúl is using a process called Participatory Varietal Selection. This brings a wealth of local experience and knowledge to the breeding process by getting farmers actively involved in evaluating and choosing the potato varieties best suited to them.

Farmers in the community of Colpar are evaluating CWR-derived potatoes which have been identified for possible national release. The farmers share their observations and preferences with the researchers so that a final decision can be made.

“Women and men may differ in their preferences for potatoes,” Raul told me, so he is keen to hear from all members of the community.

The farmers will help select the best potato based on their household and market needs.

Raul addressed the farmers and invited one of their leaders to share her story. “First, we’re evaluating the flowers,” says local leader Sarita. “We look at the quantity of flowers, the diversity, the color … lots of things.”

Sarita explained that after the harvest, they inspect the potatoes for sign of “rancha” (late blight) and determine which potatoes are best for consumption. “It’s very important for us to learn of new varieties of potatoes, not only for our own consumption at home but also for the market.”

Our meeting in the field was cut short by hail. We dashed down a slippery, muddy track to Colpar’s plaza for a group photo of the farmers involved in the project.

There were no potato tubers in the field at that time of year but one of the participants of the project, Maryluz Contreras, brought me to her storage room and showed me potatoes which she was keeping for future planting.

We bid farewell to the farmers of Colpar and traveled in the rain along the Mantaro River valley to see potato trials in different agro-climatic zones.

“We’ve repeated the trials in different places with different farmers,” Thiago told me. “Then we combine all of the data so we can ensure the variety which is selected for release is really the one most preferred by most farmers.”

As our long day in the field ended, the rain subsided long enough for me to enjoy the magnificent views along the Mantaro River, whose valley was dotted with potatoes fields. And where I hope to see healthy, high yielding potatoes, perhaps with just a touch of the wild in them, thriving in the years to come.