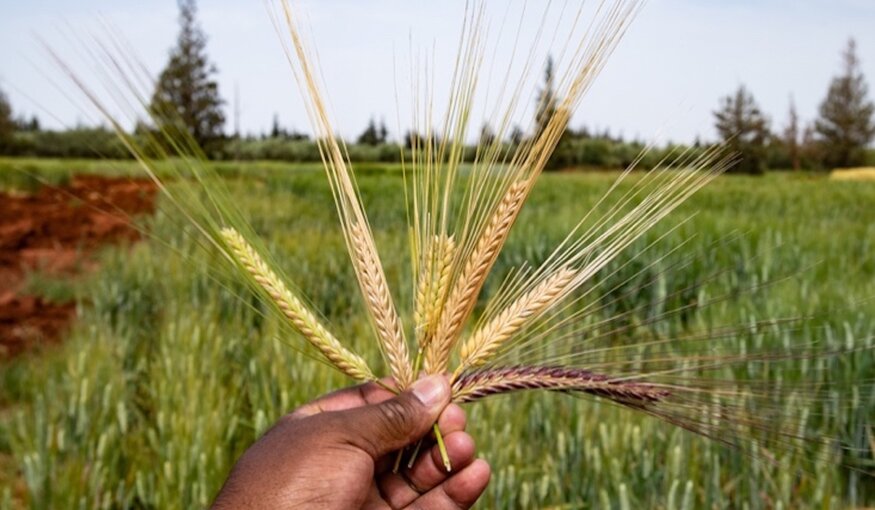 “I’ve never seen barley looking this great before!” El Kbir Safraoui couldn’t hold back his excitement about the crop growing in his fields. And he had seen a lot of barley in his lifetime of farming in central Morocco.

Safraoui is collaborating with a team of crop breeders from the International Center for Agricultural Research in the Dry Areas (ICARDA). They are working together to evaluate new varieties that have been developed using wild relatives of barley which can better cope with the whims of the changing climate.

The Food of Gladiators

“Our ancestors were growing barley a long, long time ago… probably for 10,000 years,” said Miguel Sanchez Garcia, a barley breeder with ICARDA. “It was the food of the gladiators. They were known as hordearii, or barley eaters.”

Now, barley is the fourth most produced grain globally, after maize, rice, and wheat. In Morocco, it is the second most produced cereal and an important multi-purpose crop for both humans and livestock.

Barley is widely grown in the drylands because it can produce a decent crop under some pretty harsh conditions, like saline soils or climatically marginal environments.

“We call barley ‘the last crop before the desert’ because it can survive on the fringes of the desert, where other crops fail,” said Filippo Bassi, a senior scientist at ICARDA who is leading the project. “When things get really tough and severe drought is the norm, there is no crop as good as barley. It survives the harshest of conditions and can be a lifesaver for farmers.”

But yields of the last crop before the desert suffer when it is forced to grow right in the desert by climate change. “In 2016, Morocco experienced the drought of the century, and we saw complete crop failure in many parts of the country,” said Miguel. “And in the 2018-19 season barley production was still 40% lower than the 20-year average. It’s been brutal.”

Reaching Out to the Wild Cousins

ICARDA has been improving barley through breeding for almost 40 years, but today breeders like Miguel need ever more genetic diversity if they are to make crops that can cope with totally new challenges. “We are turning to the hardier wild cousins of barley to seek the genetic diversity we so desperately need,” said Miguel.

These wild cousins are scraggly plants that to most people look like weeds. Still, they are closely related to cultivated barley and over millennia have adapted to withstand the harsh conditions of places like the edge of the desert. Samples of two of these wild barley species—Hordeum spontaneum and Hordeum bulbosum—have shown resistance to major barley diseases, and they can withstand heat and drought on top of that.

Over the years, plant collectors have travelled to a remote locations around the world to gather seeds of wild barley. The genebanks of ICARDA now conserve more than 32,000 samples of barley; of these, 7 percent are wild relatives. That’s actually a pretty good ratio compared to some other crops.

Breeders have crossed the wild cousins with barley cultivars that farmers currently grow, in order to combine the climatic tolerance and disease resistance of the wild plants with the productivity of the cultivars.

“The plants derived from wild barley have, in most instances, out-yielded the best commercial checks by 10 to 15 percent in recent trials due to their increased resistance to a bunch of pests and diseases and tolerance to heat and drought,” said Miguel.

But What Do the Farmers Think?

That’s all well and good, but the ICARDA scientists want to ensure that farmers witness that performance in their own fields too. So they are working with farmers like Safraoui, who are evaluating some of the most promising crop wild relative-derived plants under the conditions they know best.

“The farmers have provided some very positive feedback and have noted that the best new lines are not only yielding equally or better than the best control variety as far as grain is concerned, but also showing higher straw production. That’s important for livestock,” said Miguel. “With one-fifth of its genes coming from wild barley, we can clearly see the contribution of the crop wild relatives.”

“Barley is becoming increasingly important in times of a changing climate as it can be the last crop a farmer turns to when all other crops fail,” said Benjamin Kilian, the pre-breeding coordinator with the Crop Trust. “The success of ICARDA and its partners with barley is a great example of the contributions which crop wild relatives can make toward the improvement of our most important crops.”

That’s music to the ears of progressive farmers like Safraoui, who has seen in his own fields what going a bit wild can do for barley.

This article was originally published by Food Tank and featured on the Crop Wild Relatives (CWR) Project website.